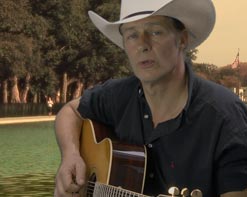 Duffy Kane is an American country blues-rock boogie rebel who plays a mean guitar, howls up a sandstorm and writes a helluva insightful lyric. He’s a thinkin’ man’s ax slinger with a lot of fret board facility and even more on his mind. “I don’t consider myself an artist,” Duffy concludes. “I’m a craftsman. I want people to see me as a man who’s spent a lot of time looking into matters of the world and speaks the truth about what he sees.”

His influences and abilities run the gamut from classical music to gritty rock and roll music. He as raised by a concert pianist father and a folk guitarist mother and he himself is an accomplished classical violin player. Like many teenagers of the day he then dove head first into rock and roll, first aping hard rockin’ yahoos like Ted Nugent and Black Sabbath. He swiftly graduated to the truly challenging fretwork of country and jazz players such as Jerry Reed, Brent Mason, Speedy West, Pat Martino, Mike Stern and all-in-one master Stevie Ray Vaughan.

When he finally turned his attention to leading his own band, that focus also shifted to country and blues. “Country guitarists are, without a doubt, some of the most unmercifully gifted players on the planet,” Duffy schools. “Some of them are even whippin’ the Jazz players’ asses! Plus, 9 times out of 10 when you’re talkin’ Rock `n Roll lyrics, you’re talkin’ degeneracy and bullshit. So I came back to Country and Blues: way cool, quintessentially American music.”

And what could possibly be more quintessentially American than a gorgeous acoustic interpretation of the song that celebrates the land Kane loves so dearly, “America The Beautiul?” His version is a transcendent, heartfelt reading that showcases all elements of his craft, whether it be the meticulous guitar playing or the emphatic vocal delivery that will send a tickle up your spine. To match the emotion breadth of the video, Kane and his team constructed a video that incorporates the natural beauty, the people and the complex history (the good and the bad), that has helped shape the USA to become who we are today. Kane is a man who is proud of his patriotism but knows that it is the citizens of a democracy who must be the agents of change, and “America The Beautiful” is the perfect message to inspire.

It is our pleasure to be working with Duffy Kane to bring you this stunning new video. We would love to hook you up with anything you may need to get this video into your programming so please give us a shout when you get a chance! Please contact Andy Gesner and the HIP Video Promo crew at (732)-613-1779 or email us at info@HIPVideoPromo.com for more info on Duffy Kane.