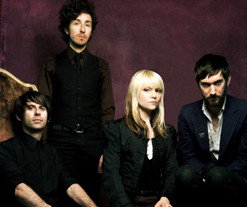 Hello programming friends! It’s Andy Gesner and the staff from HIP Video Promo, here with an explosive performance clip from Britain’s latest championship-caliber rockers. Sometimes when we send you videos from popular UK bands, we admit we worry – what if the group’s music doesn’t translate for an American audience? With The Duke Spirit, there’s no need for concern. Not since the heyday of Oasis has a British band arrived on these shores with such an irresistibly classic sound. And The Duke Spirit has something that the Gallagher brothers don’t: a magnificently blonde, camera-friendly frontwoman who seems destined to become an international star. If you’re one of the lucky ones, you’ve seen Leila Moss and her bandmates during their wildly-successful U.S. tour with the Eagles Of Death Metal; if not, well, the “Lassoo” video will give you the general idea of what you missed out on.

The nautically-themed Neptune – the band’s sophomore release – has become one of the true must-have albums of 2008. There’s pure neo-psych (“The Step And The Walk”), aching Stones-like balladry (“Wooden Heart”), raucous rave-ups (“Dog Roses”), bouncy piano rock (“My Sunken Treasure”), and even a mini-epic that climaxes in a burst of Motown horns (“This Ship Was Built To Last”). The brass is back for “Lassoo”, adding drama and color to a majestic blues-rock number that’s already engrossing. The super-tight band nails everything they attempt, and Leila Moss’s icy-cool, regal, passionate performances prove an indispensible guide through the tempest.

Rock critics on both sides of the Atlantic have been beside themselves with praise: “Neptune’s songs are just as compelling as they are polished”, raves Heather Phares of the All-Music Guide in a four-star review lauding the band’s depth, power, and flair. The Independent of London concurs, and perhaps concedes a little crush on the Duke Spirit’s frontwoman (and who can blame them?) “It’s been an eternity since we were last blessed with an authentic rock-chick personality”, explains Andy Gill, “but Liela Moss possesses not just a powerful set of pipes but also the spirit to duke it out (so to speak) with a rock band playing full-tilt at full volume.”

Indeed, Moss is a commanding presence onstage – and as good as the group sounds on record, they’re even more impressive in concert. The Duke Spirit is a relatively new band; still, they’ve already shared stages with Supergrass, R.E.M., Queens Of The Stone Age, and many other modern rock luminaries. The “Lassoo” clip catches the Cheltenham quintet in action at London’s super-hip 229 Club: Moss addresses the rapt audience with royal confidence and swagger, shaking her shoulders and brandishing her tambourine like a lethal weapon. Blue and white lights flood the stage and smoke billows behind the drumkit, but it hardly matters: the real pyrotechnics are right there upfront. As always, Moss cuts through the storm and holds the audience spellbound.

It’s a great pleasure to have the opportunity to work closely with Michael Plen, Wendy Higgs, Lydia Sarno and the rest of the team at Shangri-la Music to bring you this stellar new video. They’ve hooked us up with copies of Neptune, T-Shirts, buttons, posters and more for all of your on-air giveaway needs! They also have a slew of US tour dates in November with Eagles Of Death Metal, so please hit us up to set up video interviews when The Duke Spirit comes to your town! If you need more info, call Andy Gesner at 732-613-1779 or e-mail us at info@HIPVideoPromo.com. You can also visit www.ShangrilaMusic.com orwww.DukeSpirit.com to find out more about The Duke Spirit.