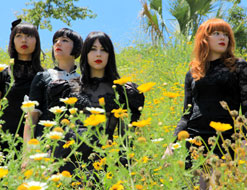 Howdy programming friends, it’s Andy Gesner and the HIP Video Promo staff, here with the return of one of the underground indie music scene’s most promising all-girl rock groups of the last several years, Dum Dum Girls. Fresh off of the success of the magnificently buzz-worthy 2010 album, I Will Be, Dum Dum Girls’ leader Dee Dee went right back into the studio legendary producer Richard Gottehrer, co-founder of Sire Records and co-writer of 60s girl-group staples “My Boyfriend’s Back” and “I Want Candy” fame, this time also taking along Sune Rose Wagner of The Raveonettes to bring you a new noise-pop and rock and roll masterpiece – “He Gets Me High”

Dum Dum Girls have built quite an impressive reputation for themselves since their infectious and attention winning video for “Jail La La.” The band recently went on to tour with Vampire Weekend, MGMT, The Vaselines, and the now widely respected Sub Pop label mates, Beach House. What really set this group apart from the crowd was their knack for pop under the warmth and comfort of lo-fi noisy indie rock. Clad in black dresses and deep red lipstick, the all-girl quartet has won the hearts of critics once again with the release of their brand new EP also titled He Gets Me High. Pitchfork has embraced this follow-up effort with even more fervor than the last, claim that “rare is the EP that sounds so crucial to an artist’s catalog and narrative, but it won’t be surprising to look back on this release in a few years and see it as pivotal in Dum Dum Girls’ career.” The folks over at Stereogum also concur, giving the album lots of features on their influential weblog. Paste Magazine raves that it is “hard not to fall in love at first listen,” and we certainly think you will agree. The folks over at ABC News have even caught on to this instantly enchanting record, proclaiming that “Dee Dee is a star performer and this act ranks among the best on Sub Pop Records’ current roster” and that the band has “a big future ahead.”

Dee Dee steps up her rock and roll chops, as her voice really takes flight on this acid drenched, yet energetic track. “He Gets Me High” hits like the faster portion of old school sixties rock and roll, with buzzing guitars and tons of harmonies that are as melancholy as they are uplifting. Just think of what a Who record would sound like if it was written by songstress with a lust for life and constant hunger for distortion. Dee Dee, always the careful, intuitive songwriter, evoking complex emotions with an economy of words, lets her girl-group melodies and fuzzed-out Jesus and Mary Chain inspired guitars take the reins.

To confirm the band’s timeless sound and carefree attitude, the video is as psychedelic as ever. Taking a Blind Melon style approach and enjoying the trippy possibilities a piece of cinema can deliver, the band is found playing in a sea of flowers, which become magnified and super imposed over the screen in an array of colors. While the singer is referring to the male figure in her life, one will certainly not feel out of place enjoying this particular offering under the influence of other particular “factors.” The explosions of patterns and filters compliment the heavy fuzz open chords and pounding drums in true summer spirit. If there is a video to summon the rush of speeding down the highway with the windows down on the way to a burning romantic encounter taking place in a setting with no roof, this is it.

We are completely entranced by the Dum Dum Girls and the video for “He Gets Me High” and feel your viewer base is bound to feel the same. We’ve got lots of Dum Dum Girls stuff here at the office from the good folks at Sub Pop for all your on-air giveaway needs. If you need more info, call Andy Gesner at 732-613-1779 or e-mail us at info@HIPVideoPromo.com . You can also visit www.SubPop.com and www.WeAreDumDumGirls.com to find out more about Dum Dum Girls.