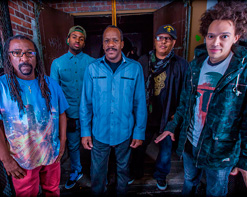 Ivan Neville is the son of soul superstar Aaron Neville and the nephew of Art Neville of the Meters, considered by many critics and fans to be the greatest funk band of all. For many years, Ivan Neville played alongside his uncle Art in the Neville Brothers – and contributed to albums by Keith Richards (Ivan is also Richards’ keyboardist in his legendary solo project Xpensive Winos) Don Henley, Robbie Robertson, Delbert McClinton, and other legendary artists eager to add some New Orleans spice to their recordings. Dumpstaphunk is his own project, and he’s joined there by musicians with roots deep in the bayou soil, including talented cousin and rhythm guitarist Ian Neville, the dual bass and vocal talents of Tony Hall and Nick Daniels III, and the recent addition of young up and coming drummer Alvin Ford Jr who splits time with popular EDM artist Pretty Lights.

“Justice” features a contribution from another master of New Orleans funk — the fiery Trombone Shorty, resident of the storied Treme neighborhood and contemporary jazz pioneer. Shorty, whose magnificent 2010 album Backatown earned him a Grammy nomination, doesn’t just take the lead on “Justice”. He blows his golden horn straight through the track, and does so with such vigor that it becomes aural reinforcement for Neville’s fierce cry for fairness.

The clip for “Justice” makes the song’s message manifest. There’s plenty of shots of the members of Dumpstaphunk in action, doing what they do best – heating up concert halls and outdoor amphitheaters with their elastic, propulsive, boldly modern version of funk. But there’s also footage of recent world events we’ve all become painfully familiar with: marches to raise consciousness, violence and oppression at home and overseas, and politicians who’ve used this atmosphere of instability to advance their agendas. The “Justice” video is a plea to be alert and aware, stand strong with brothers and sisters, and, whenever necessary, resist.

We’re incredibly excited to be a part of the Dumpstaphunk team and bring you this exceptional, poignant new video. We are here to do anything and everything we can to get this into your programming, so please get in touch with us here at HIP Video Promo. You can contact Andy Gesner and the HIP Video Promo team at (732)-613-1779, email us at info@HIPVideoPromo.com. You can also visit www.Dumpstaphunk.com or www.Facebook.com/DumpstaphunkNOLA for more info on Dumpstaphunk.