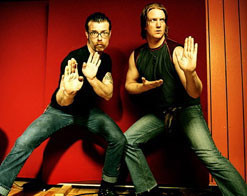 A big warm hello to all my video programming friends! It’s Andy Gesner and the staff from HIP Video Promo with a new video that will rock more than your socks off! Here at HIP Video, we value our repeat clients. But we have to admit getting a particular charge when we checked our mailbox and found the latest video for the Eagles Of Death Metal. Not only does that mean that we get to experience the thrill of a new EODM song, but it’s a sure indication that Death By Sexy, the group’s sophomore album, can’t be too far away…it’s in stores April 11, 2006!

When we first got our copy of Peace Love Death Metal, we enjoyed the hell out of it. We heard the monumental riffs and the slinky grooves, Josh Homme’s slamming backbeat and Jesse “J-Devil” Hughes’s remarkably smooth lead vocals, and figured that we were spinning the guilty pleasure of 2004. Two years later, though, we’re still spinning it. This is garage rock with legs – straightforward songs of lust and debauchery that make an immediate impact, and then manage to lodge themselves in your skull. Like the best party music, EODM feels inevitable and indelible, celebratory, raucous, and maybe a little dangerous. It’s testament to the impact of Peace Love Death Metal that despite the presence of the famous Homme, nobody refers to the Eagles Of Death Metal as a QOTSA spinoff project anymore. The duo has established a discrete and vivid identity.

And J-Devil has become a star in his own right. Besides sporting what is by general acclimation the best moustache in rock, the Eagles Of Death Metal frontman has distinguished himself both by his incendiary live performances and by the company he keeps. Hughes has shown his versatility by working with Peaches and UNKLE, and his pal and compatriot Dave Grohl invited the Eagles to open arena shows for the Foo Fighters in Europe. The band will be supporting the Strokes on their spring American tour. Cementing the band’s rise to the ranks of the nation’s best, the Eagles Of Death Metal have signed with Downtown Records. Death By Sexy is poised to take the world by storm.

“I Want You So Hard” picks up where the singles from Peace Love Death Metal left off: it’s a come-on, half sexy and half unhinged. Homme still slams the skins with a bone-rattling combination of force and precision, and Hughes answers in his now-customary purr. He punctuates his phrases with scalding guitar, and bridges the second and third verses with a percussive solo – and a backing vocalist with a deep voice growls out the warning over the drum breaks.

Saturday Night Live writer and Lonely Island member Akiva Shaffer is an inspired choice to direct an Eagles Of Death Metal clip – his deliciously geeky insouciance perfectly matches the band’s playful hedonism. Shaffer has directed clips before – but Hughes and Homme seem tailor-made to suit his sense of the parodic. In the “I Want You So Hard” clip, J-Devil is cast as a guitarist who plays with such hurricane force that he literally blows the clothing off of his listeners. When he picks up a beautiful blonde at a bar and takes her home to his bed, he doesn’t climb in with her – instead, he stands at its foot and takes a solo. She’s unclothed by the winds, and buffeted to conventional video ecstasy. But J-Devil proves generous with his powers, undressing all the patrons at the pub, a kid peeking in his window, a grouchy old couple, and an Asian businessman on a streetcorner. All are initially shocked – until they realize that Hughes has done them a favor.

Here at HIP we are thrilled to be working with David Mandelbaum, Michael Pontecorvo, and the rest of the folks at Downtown Records to bring you this incredible new clip! We will have plenty of copies of Death By Sexy along with some other Eagles Of Death Metal goodies, so please don’t hesitate to get in touch! If you need more info call Andy Gesner at 732-613-1779, or email info@HIPVideoPromo.com. You can also visit www.EaglesofDeathMetal.com to find out more about Eagles Of Death Metal.

For info about Eagles Of Death Metal’s previous videos, “Speaking in Tongues ” & “I Only Want You ” click HERE