Eastern Anchors “Above Your Station” 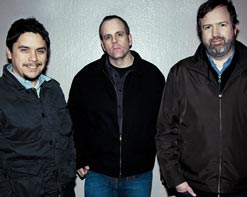 Formed from the ashes of indie stalwarts Aviso’Hara, principle players in the fertile New Brunswick, NJ music scene of the late 90’s and early 00’s, comes Eastern Anchors, who have been blowing listeners’ eardrums since 2007. Their newest aural assault, a split 7-inch single, finds the group — Walter (guitar/vocal), Dave (bass/vocals) and Ken (Drums) — sharing sides with fellow hub city rockers Zero for Conduct. The Anchors’ contribution, “Above Your Station,” is an impassioned reminder that their brand of 90’s indie needs to be kept alive even when much of the world turns a deaf ear and will instantly excite fans of classic Gen X bands like Sugar, Dinosaur Jr and Jawbreaker.

When Walter declares “you can’t catch a break to save your soul so you must raise up your kids on rock-n-roll” it’s a sincere call to arms — or fuzzed out guitars as the case may be — that simply can’t be dismissed. This exclusive piece of vinyl, as well as the band’s recent full-length Drunken Arts and Pure Science, were both recorded and mixed by Tom Beaujour (Nada Surf, Jennifer O’Connor, Guided by Voices) at Nuthouse Recording in Hoboken, NJ, and mastered by Kim Rosen at Knack Mastering. The Anchors will drop another full-length on your head next year, but for now they’ve doubled down on “Above Your Station” by releasing a video that exudes all of the same grit and energy of the song.

The video tells the tale of a female protagonist who lives the aforementioned lyric of “can’t catch a break to save your soul.” Whether it’s her car dying, or her rotating choice of crap jobs, this unfortunate indie rocker is having one rough day after another. It’s a feeling we can all relate to, that everyone is out to get you. The uptight manager, snarky coworker and impatient customer at the coffee shop. The overly eager creepy guy at the video rental store who gets just a little too close for comfort. The comic book guy at the book store. It’s enough to drive anyone mad, but when her coworker informs her that she’s been chosen to stand outside in a squirrel costume, this cycle of torture comes to an abrupt end! She grabs her long board and splits out of there with no apologies to find her happy place. It’s a satisfying end to this frustratingly amusing video and will immediately pull you in for another watch!

Here at HIP you know we ALWAYS look out for our fellow Garden State musical kindred spirits, and humbly ask for your ears and eyes to pay special attention to Eastern Anchors and help spread the word on their contagious brand of indie rock goodness. We would love to hook you up with whatever you may need Eastern Anchors related to get this video into programming so please don’t hesitate to be in touch. You can contact Andy Gesner and the HIP Video Promo at (732)-613-1779 or email us at info@HIPVideoPromo.com . You can also head to http://www.facebook.com/EasternAnchors/ for more info.