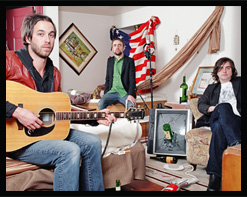 Greetings from the East Coast! It’s Andy Gesner and the staff from HIP Video Promo coming at you with a video that is sure to get your rocking shoes on! When singer and guitarist Josh Ostrander left Laguardia last year, their friends and fans thought they were insane. Why would he disband a highly-regarded indie rock group – one on a major label to boot? Ostrander admits that even his parents were mad at him for his decision. Yet he’s always been independent and idiosyncratic, and when he felt that his vision wasn’t being adequately served, the move left for him was a swan-dive back into the underground. Determined to follow their own aesthetic compasses, Ostrander, former Laguardia drummer Greg Lyons, and bassist Vern Zaborowski assembled Eastern Conference Champions, and crafted a rock sound that was wholly theirs.

And now they’ve gotten the last laugh. A sizzling self-produced EP led to an indie deal, and after the president of Geffen Records gave it a listen, he signed them on the spot to their Suretone imprint. Superproducer Owen Morris – best known for his groundbreaking recordings with Oasis and The Verve – has signed on enthusiastically, and has crossed the pond to work with the trio. Now, the Eastern Conference Champions are busy working on their own major label debut: one where they’ve been guaranteed creative control.

In the meantime, they’ve given us The Southampton Collection, an EP named after the small Bucks County suburb where they grew up. The five songs sound, as Owen Morris testifies in a “behind the scenes” video clip posted on their MySpace page, totally f-ing unlike anybody else. Start with Ostrander’s voice – it’s an outraged, strained chirp, but it regularly reaches emotional territory that most singers never visit. Then there’s the songwriting: tight and clever and gritty-poppy, with unusual chord progressions and indelible melodies. “Nice Clean Shirt”, the lead single, recalls The Shins at their most aggressive, Radiohead at their tuneful best, and Oasis themselves on its rafter-shaking release. Eastern Conference Champions will be taking their stage show – already widely commended for its exuberance and fan-friendliness – to the U.K. at the end of November, where they’ll be sharing stages with the like-minded Cold War Kids.

“Nice Clean Shirt” demanded a clip that’s at least slightly offbeat, and director Joe Ronca has delivered. The camera is fixed on the display window of a vintage radio and TV shop – the sort you might see in a small town. The members of Eastern Conference Champions appear on the classic frames, though no two screens broadcast the same image. One contains Ostrander’s face as he sings, another captures his hand on his guitar, another shows Lyons on the skins, and still others are awash in static. These televisions switch on and off; reception blurs; their arrangement in the show-window gets shuffled; in pure rock and roll style, a beer can gets shoved through a monitor. Cleverly, Ronca projects images of moving automobiles on the “glass” in front of the TVs; it all looks to be part of a natural streetscape. Yet the shots of the band are flat and fragmented, disassembled but still operational, like machinery powered by remote control.

We’re thrilled to have the opportunity to work with Lexi Ben-Meir and all of the cool folks at Suretone. They’ve been kind enough to supply us with enough copies of The Southamption Collection for all of your on-air giveaway needs, and from multiple listens here at HIP to their stellar EP, everyone on the staff has become instant ECC supporters and are prepared to do whatever it takes to get this band the national buzz they deserve. If you need more info, call Andy Gesner at 732-613-1779 or e-mail us at info@hipvideopromo.com. You can also visit www.Suretone.com to find out more about Eastern Conference Champions.