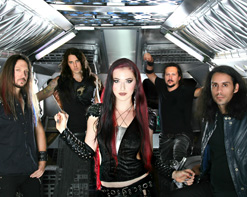 With strong songs and an extremely dedicated fan base behind them, Edge of Paradise have grabbed the metal and hard rock scenes by the horns, and do not plan on letting go. Edge of Paradise formed in 2011 by lead vocalist Margarita Monet and guitarist Dave Bates, who wasted no time in showing what a perfect musical combination they convey. Led by such a powerhouse of a vocalist, the band has no trouble creating and surrounding their listeners in a captivating world of passion and ambition. Dave Bates adds to this world with his very well-known ability to shred, stacking his leads above the hard-hitting drums and basslines of Nick Ericson and John Chominsky.

Edge of Paradise’s debut album Mask dropped shortly after the band’s formation in 2011. Immortal Waltz followed in 2015, showing a new-found maturity, especially after a heavy touring year. When it came time to dive back into writing, the band strived for a new burst of energy while staying true to their roots. Thus, their latest release “ALIVE” was born and ready to take on the world.

“ALIVE” opens up with the title track, and is paired with a dark, yet exhilarating music video that makes you feel like Monet will jump from the screen to grab you. You even catch glimpses of a scientist concocting a potion to bring Monet that sense of life that she wants. “Alive” is the perfect song to start the record, as it introduces an overall theme of pain, and the desire to come back from its consequences. “Run through my veins. Break me from chains. I wanna feel alive” Monet calls out in hopes for a response. What makes the record even more emotion provoking is the stunning album art, that tells its own comic style story alone.

HIP Video Promo is very excited to bring you Edge of Paradise’s video for “ALIVE”. We would love to set you up with anything Edge of Paradise related, so please get in touch! You can contact Andy Gesner and the HIP video promo staff at (732)-613-1779 or email us at info@HIPVideoPromo.com or visit www.EdgeOfParadiseBand.com for more info on Edge Of Paradise.