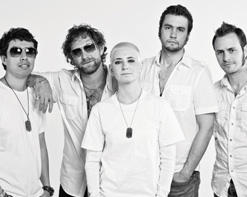 Hola programmers. We bet you didn’t expect that the next big rock band video you’d be getting from us comes from south of the border! It’s Andy Gesner and the HIP Video Promo crew, here with not one, but two exciting clips from one of Mexico’s most successful indie rock bands of the last several years – ELAN. The female fronted rock outfit crosses over to the States with “Rerun” and “More Than Her” from their seventh studio album Regular Weird People.

ELAN hail from Guadalajara and have earned recognition for being the first Mexican band to successfully release albums completely in the English language, which quickly initiated a movement that allowed other recording artists throughout Latin America to sing in English and in turn help their careers to expand to territories unreachable before. Being one of Latin America’s most critically acclaimed and commercially successful independent latino bands, ELAN have sold 1.7 million albums worldwide and has recorded 7 albums since 1996! The group was founded by lead vocalist and keyboard player Elan Sara DeFan (sole composer of the band’s work) and lead guitarist and producer Jan Carlo “El Vikingo” DeFan. ELAN broke sales and radio play records in Latin America and Australia, some of which include the longest playing #1 English language single on the radio in Mexico with the first single “Midnight” which remained #1 on the charts for 21 weeks without relinquishing its position and the longest running #1 video on Latin America’s largest music network Telehit; with 12 weeks at #1 with the video for “This Fool’s Life”. The band also graced MTV Australia on the Top Ten. ELAN performed major national and international events including MTV Video Music Awards Latin America, Mexico’s National Academy of Music‘s Oye Awards, the Eres Magazine 15 Year Anniversary Celebration and the Sanborn’s 100th Anniversary Celebration. The group holds the accolade of one of the most successful and longest running tours ever featured in Mexico by an independent band.

“Rerun” is the leading video among the two. The song is a gorgeous ballad that constantly builds until its full band finale in the end. The song is a testament to ELAN’s powerful vocals and their knack for epic delivery. On the other hand, “More Than Her” is a full on riotous romp that pays tribute to good ol’ 60’s and 70’s style rock and roll. The songs show of the band’s diversity on Regular Weird People, which the band recorded live in a matter of three days with the collaboration of Rafa Sardina as recording engineer and co-producer (Grammy Award winner and renowned for his work with artist such as Stevie Wonder and Macy Gray amongst others) and mixed by Michael Brauer, who besides having won the Grammy Award on many occasions, has been internationally acclaimed for his work with The Rolling Stones, Bob Dylan and Paul McCartney. The video segments couldn’t be more different as well. “Rerun” takes place in a town ripped apart with military gang warfare and follows the footsteps of a girl who dies as a result of an explosion. However, “More Than Her” takes place at a senior citizen dinner that turns into youthful debauchery as the old folks start having sex in the bathroom, doing body shots, and starting fights.

We’re exuberant to be working with a band that has achieved monumental success on their own terms and through their own hard work. We’ve got copies of Regular Weird People here at HIP HQ, so please be in touch so we can hook you up! If you need more info, call Andy Gesner at 732-613-1779 or e-mail us at info@HIPVideoPromo.com . You can also visit www.ELAN-online.com to find out more about ELAN and their fall tour.