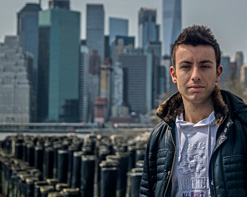 He pursues an uninterested beach-goer. He spots a tan brunette beauty on the beach and advances, but she ignores him. Elia is persistent though, as he follows her he gets a little closer every time, up until he follows her into her hotel, where she breaks the fourth wall in a cute dance session.

The Italian born pop singer Elia is back and better than ever! This fresh face in the music industry gave us an animated love story earlier this year with “Time To Rise,” reaching programmers far and wide and connecting with viewers on every platform. Now he’s delivered yet another one of a kind love story in the form of his new video for “Your Sex Device.”

Elia started his career with just his laptop and an idea. With no formal training and no prior experience with the industry, this was a risky shot not many would dare to take! But he did, and now he’s already released an album White Owl and has produced two amazingly crafted videos! Coming from Italy, this primarily pop artist also has influences from a variety of genres like dance, Latin, and rock— blending together to create a unique personal style of pop!

From the driving bass line, to the glistening guitar licks to Elia’s trademark powerful vocals, “Your Sex Device,” showcases all of this rising star’s combined efforts. His flair for showmanship, and for picking up the ladies, is also paramount in this clip, which was filmed in beautiful Ibiza, Spain. While enjoying the beautiful resort, Elia spots a tan brunette beauty in the pool and advances. She leaves her phone at the pool, and Elia sneaks over to put his number in, so that he can text her later. “I’m your sex device!” He texts her. She ignores his advances, but he’s persistent. He further pursues the unwilling beachgoer, following her around the resort until he finally follows her into her hotel. Instead of confronting him, she breaks the fourth wall in a cute dance session, singing “I’m your sex device!” At the end of the clip, we see him waking up from a nap on the couch, realizing his brunette babe was just a dream.

It’s a thrill to be working with Elia once again, and also programmers like yourself to help him get more exposure. Please let us know what we can do to get the “Your Sex Device” music video into your programming! For more information please contact Andy Gesner and the HIP Video Promo team at (732)-613-1779, email us at info@HIPVideoPromo.com. You can also visit www.EliaSounds.com for more info on Elia.

For info about other Elia music videos, click HERE