Eliza Queen "Go and Do That" 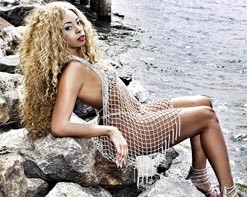 Eliza Queen, who describes herself as a rose that grew, is a culturally diverse R&B songstress born and raised in South East London, by way of Nigeria, with touch of New York, which is where she currently resides. Growing up in a single parent household, she has overcome many obstacles in her journey and is continually inspired by the trials and struggles of modern life.

At the tender age of 7, she began to discover her singing and writing ability and drew inspiration from artists like Whitney Houston, Prince, Michael Jackson, Marvin Gaye Stevie Wonder, Earth, Wind and Fire, to the likes of Bob Marley, Dolly Parton and Nigerian superstar Sunny Ade; all of whom were on constant rotation in her household.

Those abilities developed into a passion and Eliza Queen has since performed and received much radio play in both the U.K and the U.S, whilst at the same time attaining a degree in Psychology. A highlight in her career was releasing a video in the UK for a track featuring UK based rapper Chedda entitled “Be There”, which got a great amount of airplay on music Channel U; and later going on to release her single “Don’t Say Goodbye”, which was featured on MTV UK. Her new single “Go And Do That” is creating a buzz in the industry, and has been gracing the airwaves both in the UK and US while slowly starting to penetrate the Nigerian market.

Her efforts to expand to an international audience will be greatly enhanced by mesmerizing new video for “Go And Do That.” The video begins with Eliza looking as fierce as ever in a makeup chair backstage as her photographer patiently awaits. Once on set the tension between the two is immediately apparent. Is he the subject of her serenading with lines such as “Why’d ya have to break my heart” and “Once was light but now it’s all so dark.” The tension is palpable and Eliza opts to strike out on her own rather than stand face to face with misbehaving man. Once she has shed the dead weight she begins to shine even brighter than before. We are treated to scenes of her in a variety of dazzling outfits spread through the urban landscape of New York City. Her ownership of the screen is immediate and unflinching, a strong reminder that even though she may be singing about heartache and love lost, she is a still a strong woman who will be alright in the end. After all, no man in his right mind would pass up the opportunity to be a part of Eliza’s world.

Here at HIP it’s our treat to be able to bring you this exciting new artist and her sensual and sexy new video “Go And Do That.” Please contact Andy Gesner and the HIP Video Promo staff at (732)-613-1779 or email us at info@HIPVideoPromo.com for more info on Eliza Queen.