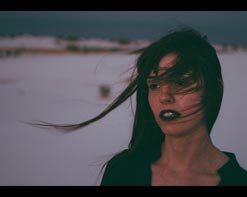 Emma Ruth Rundle is a Los Angeles-based accomplished guitarist, singer/songwriter and member of Red Sparowes and Marriages. Her first official solo album, Some Heavy Ocean, presents a collection of impassioned, cathartic songs, exorcising the ghosts of one of life’s dark detours. Melancholic, but equally hopeful and accessible, the album wears its emotions on its sleeve. One critic described Rundle’s voice as “bone-chilling texture filled to the brim with intent”, and a better description is difficult to imagine; when paired with her compelling guitar playing, an enduring spirit takes root.

Touring the world playing the Sparowes’ epic brand of instrumental heaviosity sparked a fruitful musical connection with fellow Sparowes guitarist, Greg Burns. When that band commenced a well-deserved hiatus in 2011, she and Burns (on the invitation of Russian Circles) instigated a new group, Marriages, who supported Circles in California and then promptly began recording a debut mini-album, Kitsune (subsequently released by Sargent House in 2012). Meanwhile, Rundle and friends as The Nocturnes reconvened briefly in 2011, issuing a full-length album, Aokigahara, while solo she recorded an album of experimental guitar compositions, tentatively made available online.

What followed was a “dark, difficult time”, marked by family problems and personal struggles which, though exhausting emotionally, also incubated Rundle’s conviction to use their inherent misery as fuel for expression. And so, in 2013, she literally moved into Sargent House’s home studio in Echo Park, sequestering herself for two months while writing and recording what would become Some Heavy Ocean. Itself a taxing experience, the process of creating the album was fraught with problems and setbacks that, naturally, served to fortify its unmistakable air of sadness and desperation. Which isn’t to say Some Heavy Ocean isn’t equally optimistic or compelling. An apt title if ever one existed, the album swells and crashes, waxes and wanes, ebbing and, yes, flowing – the way all great albums do. The songs twist and sway like kelp forests drunk on its amniotic tide.

The lead video for “Arms I Know So Well” (which also incorporates the brief title track “Some Heavy Ocean”) is a haunting piece that strikes the right balance between darkness and drama. The video focuses on Emma in the center of the shot with a spotlight-lit forest spinning around her. Creative camera angles and a few spots of crafty editing and we’re privy to not just one Emma, but a rapidly multiplying collection of clones that all deliver the same impassioned performance. It’s an all-around minimalist treat and an exercise in how to use the simplest nuances to create a heightened sense of drama. This is a beauty of a video you won’t want to miss.

We are very proud to be working with the folks at Sargent House once again and hope you will embrace this video as emphatically as we have. If you’d like to get your hands on a copy of Some Heavy Ocean, please drop us a line at (732)-613-1779 or email us at info@HIPVideoPromo.com . You can also visit www.SargentHouse.com/ for more info.