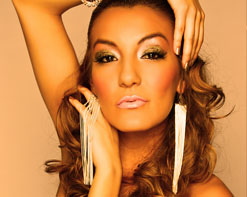 Contemporary music is just like art, whereas it is good to stick to particular genres, but even better when you steer in different directions. Here at HIP Video Promo, we experience all types of genres—from mainstream pop, to underground hip-hop. It is with artists, such as EvaFe, that we can take a fresh breath of air, so to speak. Her music is upbeat pop music, which includes the best elements of dance music, but her style and epic charisma add a certain amount of spiciness to the so-called generic pop music of today.

Fuego Music Group presents us once again with the colorful approach of EvaFe. Her undeniable talent and passionate demeanor were discovered in 2009 by Damon Redding, nephew of the one and only Otis Redding. When listening to her music, it is easy to see that her Latin heritage shines through. She has recently opened up for Don Omar, a major latin reggaeton artist, performed for significant events, and her latest video for “Oxygen” is the third of the Oxygen Trilogy, which is a trilogy of Latin infused remixes. The original video for “Oxygen” blew us away, and now with the High Rock Remix, we see a sexier and intriguing side of EvaFe’s music that leaves us wanting more.

It’s hard to ignore the flavorful atmosphere of the High Rock remix version for “Oxygen.” Throughout the video, we follow the classy EvaFe throughout a night on the town. She joins her friends, spending the evening dancing and turning heads in the flashiest clubs around. Not only is the video entertaining and full of life, the music is completely moving. The High Rock remix doesn’t take anything away from the original, soulful album version—it merely raises more attention to EvaFe’s beloved latin heritage. The video draws attention to the beauty of EvaFe, but it highlights the talent that exists within her soul. Those who love bright lights and the beauty of the night will find it impossible to do without this remix of EvaFe’s “Oxygen.”

We knew early on that EvaFe would leave her audience in awe. From the original album version of “Oxygen” to the High Rock remix, we have seen a difference between EvaFe’s stylistic behaviors. Like night and day, we see the classy, smart, and sophisticated side of this singer, while on the other hand we see the sexy side of this talented woman. Every great artist knows how to change from one costume to the next, and that is exactly what EvaFe does so well. If you need more info about EvaFe, contact Andy Gesner at (732)-613-1779 or email us at info@HIPVideoPromo.com . You can also visit www.EvaFe.com for more info about EvaFe.