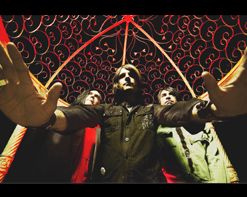 Greetings to all music video cohorts throughout the country! It’s Andy Gesner and the HIP Video Promo staff back again with another dynamic video that is sure to keep everything fired up in these blustery winter months! Today we’ve got the great pleasure to be bringing you the latest clip from one of our oldest clients and most favorite bands – The Exies. Back in 2002, the Los Angeles trio shut down Route 2 to shoot their clip for “My Goddess”, a song that became both a radio staple and a Mainstream Rock chart hit. In ’04, they outdid themselves with “Ugly”, the centerpiece of Head For The Door, their furious followup to Inertia. “Ugly” peaked at #13 on the US Modern Rock charts, and The Exies landed tracks on PS2’s Guitar Hero and NFL Street, and toured the country with Mötley Crüe and Sum 41. To date, the band has sold more than 400,000 copies of Head For The Door and Inertia, and they’ve attained near-legendary status across America for their kinetic gigs.

A Modern Way Of Living With The Truth is the first new Exies album since Head For The Door, and their initial release for our pals at Eleven Seven Music. The move to an independent hasn’t slowed down the band a bit – in fact, it appears to have re-energized them. The trio has stretched out on the set, expanded their sonic palette, and even included a ruminative version of the Talking Heads’ classic “Once In A Lifetime.” Singer Scott Stevens remains one of the most inventively melodic songwriters in modern rock, effortlessly crafting memorable verses, bridges, and choruses. But his sense of craft never gets in the way of his urge to stomp. Among current heavy bands, perhaps only the Foo Fighters so seamlessly combine power-pop hooks with post-grunge fury.

“Different Than You”, the lead single from A Modern Way Of Living With The Truth, is a showcase for the band: inevitable, powerful, and immediate, the song builds from subdued, purred stanzas to an anthemic release. And with a thoughtful, reflective lyric, Stevens reminds his audience that “Exies” is short for “Existentialists”. “I was so stupid when I was young”, he sings, in an explicit apology to parents and elders who he once dismissed. Candid, brave, and incisive, his voice heavy with regret, the frontman acknowledges his own past foolishness.

You might not be familiar with video director P. R. Brown by name, but you definitely know his work: he’s the iconographer who crafted so much of Marilyn Manson’s public image. He’s also applied his twisted vision to album art for Korn, Coal Chamber, Billy Corgan, Mötley Crüe, and many others – it’s Brown’s artwork that adorns the cover of the past three Exies albums. Since he turned his attention to music videos, Brown’s Bau-da Design Lab has worked with heavy rockers Switchfoot, Buckcherry, and Audioslave, and also with pop acts like Death Cab For Cutie, Matisyahu, and Paul Simon.

Brown’s clip for “Different Than You” plays with the duality of memory and the heaviness of regret. Much of the color of the film is intentionally washed out, but streaks of red remain in the frames – reflected off of the drummer’s cymbals, dyed in the folds of a young woman’s hair. Stevens and the girl are both portrayed as incorporeal – they drift down the streets of Los Angeles, stalking the same sidewalks and alcoves, running their fingers through the spokes of the same fences. There’s a sense that they’re looking for one another, and longing hangs thickly on their faces – but when their bodies arrive at the same spot, they pass straight through each other.

Here at HIP, we’re happy to be teaming up with Jason Spies and the hard rockers at Eleven Seven Music yet again to bring you this spellbinding new video. Please help us keep the Eleven Seven Music winning streak we’ve begun with Jonny Lives! and Marion Raven alive by giving The Exies your undivided attention. The band will be touring throughout 2007, and for those of you who were around with me back in 2003, you know this band is an awesome interview! Please let us know if we can hook you up with copies of their new CD A Modern Way Of Living With The Truth for on-air giveaways. If you need more info, call Andy Gesner at 732-613-1779 or e-mail us at info@HIPVideoPromo.com.

For info about the previous video from The Exies, “My Goddess ” click HERE