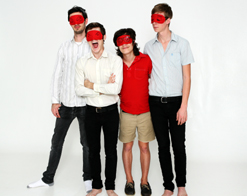 Hello music fans! It’s Andy Gesner and the staff from HIP Video Promo, here to share a boisterous clip from an irresistible young group. Chris Farren’s voice is a punk-rock roar – a raucous, shredded-throat shout of tremendous authority. It leaps out of the speakers like a wildcat, and commands the attention of listeners. Imagine the surprise, then, when fans of Fake Problems’s recordings finally see their hero and discover that he is not a muscle-bound, thirty-something stevedore, but rather a young, sweet-faced, telegenic rocker. His bandmates, too, look barely out of high school. But when the Florida quartet plugs in and plays, their songs hit with the raw force of any band in America. Some groups struggle for decades to achieve this sort of roughneck mastery. Fake Problems have done it in three years.

It’s Great To Be Alive, their follow-up to the much-loved How Far Our Bodies Go, is both an expansion of the Fake Problems sound and an affirmation of the songwriting basics that the band believes in. Every track on the record is wildly catchy and instantly memorable; these choruses are indelible, and they’re played with an enthusiasm that’s impossible to fake. At the same time, the band has expanded its palette, adding backing vocals, horns, and even strings. A few of the folkier tracks are positively Dylanesque; others recall The Gaslight Anthem or The Hold Steady. Credit the able A.J. Mogis (Rilo Kiley, The Faint, most of the Saddle Creek roster), whose production on It’s Great To Be Alive is warm, empathetic, and crystal-clear.

The album also sounds and feels incredibly live. Fake Problems are formidable young showmen; those who’ve gone to their performances can attest to the fact that their exuberance is infectious. They’ve already crossed the country with Against Me!, The Riverboat Gamblers and as headliners; this winter, they’ve taken to the road again playing dates with Murder By Death and the Builders And The Butchers. To properly represent the songs on It’s Great To Be Alive, they’ve welcomed onstage horn players and cellists..

But the core of the group’s sound remains the electric guitars, the crisp drums, and Farren’s remarkable voice. “The Dream Team”, the lead single, foregrounds those qualities. And for the clip, they’re throwing a party that’s every bit as wild, exciting, and dynamic as their music (and, for that matter, their live shows). We’re shown Fake Problems in performance, and again, the contrast between their telegenic appearance and their two-fisted, no-holds-barred rock sound is positively eye-catching. Farren, in particular, hurls himself at the microphone vigorously, but remains in firm control of the proceedings. Elsewhere, all manner of playful nonsense has broken out: girls and boys in America are flirting, fighting, turning each other on, and down, and off. A jousting match on bicycles – each cyclist equipped with gigantic papier-mache lances and makeshift “armor” – is held to general merriment. By the end of the clip, everybody is hurling colored powder around; even the band is doused, and stained. It’s hard to imagine a video that could look like it was more fun to make, and it’s appropriate that this clip is attached to a band whose music is so clearly thrilling to play.

Side One Dummy keeps the hits coming, and we couldn’t be more thrilled to be working with Eddie and Johnny B and the rest of the Side One Dummy crew to bring you the new Fake Problems clip. Let us know if you want any copies of the Fake Problems It’s Great To Be Alive CD for contests or on-air giveaways; we have a healthy supply and are here to hook you up! We also encourage you to get in on the tremendous Give It Up For Side One Dummy contest where the grand prize is the complete Side One Dummy catalog on CD and a Flogging Molly skate deck! Every time you program this terrific clip, you get another entry in the contest! The drawing will take place on April 27th, so that gives you plenty of time to support this deserving musical tsunami. If you need more info, call Andy Gesner at 732-613-1779 or e-mail us at info@HIPVideoPromo.com. You can also visit www.SideOneDummy.com or www.FakeProblems.com to find out more about Fake Problems.