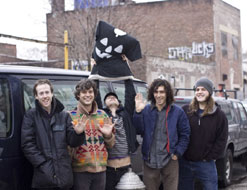 If ever a pair of independently-made videos deserved to go viral, it’s the latest two from the buzzworthy Fang Island. With director Carlos Perez, the celebrated Brooklyn band have made two bizarre, beautiful, and celebratory clips that are certain to be counted among 2010’s best. In the video for “Life Coach”, an Elvis-dressed samurai fights a sword battle (in slo-mo, of course) with wand-wielding fairies, phantoms, and an anthropomorphic castle. The clip climaxes amidst a flashing colored lights, a guitar solo, and enough splashing paint to make Jackson Pollock envious. The “Daisy” clip is even more colorful — it’s a total demolition of a choreographed video from the mid-Eighties. In a sun-drenched, mirrored studio, face-painted mimes dance in sequence with men wearing masks of the Presidents. Perez’s camera moves just as fast as the dancers do: the director circles the room at top speed, switching from upside down to right-side up and back, and pulling the viewer into the revelry. They’re clips that really have to be seen to be believed, and if video-sharing sites operate the way we all know they do, everybody’s bound to see them soon.

Both “Daisy” and “Life Coach” are on Fang Island, the band’s lauded debut — an album that Pitchfork, in a rave, recently called “life-affirming”. That each Fang Island show wins the band hundreds of new fans isn’t just an educated guess: it’s scientifically-proven. Next Big Sound, a website that tracks online enthusiasm, determined that no group at SxSW grew their fanbase any faster than Fang Island did. Fang Island has already hit the Billboard Heatseekers charts; from here, the sky is the limit. They’ll be spending the spring traversing the continent, and it’s altogether likely that by summer, they’ll be one of America’s most talked-about new talents.

Big thanks to Sargent House for allowing us to be a part of the Fang Island team. If you need more info, call Andy Gesner at 732-613-1779 or e-mail us at info@HIPVideoPromo.com. You can also visit www.SargentHouse.com to find out more about Fang Island.