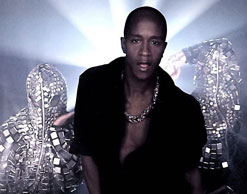 Greetings, everybody, it’s Andy Gesner and the staff from HIP Video Promo, here with a pair of interpretations of the latest effort from one of the fastest-rising stars in Pop & Dance music. Farrad has become a hot name because of his flexibility: club hits aren’t all he does. He’s comfortable with synthpop and disco, but he can also apply his pipes to dirty soul and heavy rock, too. For such an expressive instrument, Farrad’s voice is surprisingly sturdy — he can go toe to toe with big guitars and come away unscathed. To demonstrate, he’s made two different videos for a pair of mixes of the fast-talking “Misunderstood,” one which casts the singer as a roughneck R&B crooner, and one which finds him rocking, and hard.

“Misunderstood” is the perfect vehicle for these kinds of explorations. It’s a slinky groove, compulsively danceable and irresistibly catchy. The song is simultaneously a come-on and a kiss-off, and Farrad throws down with complete conviction. Those interested in the singer’s music ought to start here first: “Misunderstood” presents Farrad as a complete character; a fascinating study in contradictions; a man with a sensitive heart and a balled fist.

When last we left the singer, he was locked in a desert duel, facing down motorcyclist Shane San Miguel in the Bonneville Salt Flats. The “Pick Your Face Up From The Floor” video presented Farrad as a distorted angel, battered by the world around him but unwilling to give an inch. That video was not only widely received, but it is currently in heavy rotation on MTV/LOGO’s weekly Top Ten countdown on The Click List. In the two clips for “Misunderstood,” he’s nowhere near as nice. Directed by the internationally praised performance art genius, Caden Manson, this is Farrad on the attack, addressing the camera in a dazzling array of wigs and costumes, each one more arresting than the last. He means to make an impression — and he succeeds.

The song’s Rock Mix is drunk with choral vocals, heavy beats, and chugging guitars; Farrad’s voice is ever-so-slightly distorted to match the Living Color-style propulsiveness of the backing track. The choreography in the clip is similarly aggressive — Farrad, flanked by two dancers in black-leather body suits, stands back from the camera, a defiant expression on his face. His hand open, his arm bent at the elbow, he pushes at the air around him, keeping the nonbelievers at bay. Elsewhere, the singer dresses himself in provocative get-ups, including one high-contrast black-and-white look created entirely from body paint, creating the effect of a zebra. The background behind him is similarly decorated. Sometimes the lines are horizontal, and the singer looks camouflaged. Sometimes they’re vertical, and they resemble the bars of a prison he’s escaped. Sometimes they swirl, kaleidoscope-like, and Farrad becomes part of a dizzying hallucination.

The Soul Mix of “Misunderstood” is slower and simpler — but that just makes it all the more menacing. Reminiscent of Prince in his hey day, the music is stripped back to a stark, grinding groove: guitars collide with synthesizer, overdriven bass, and strange sounds of untraceable origin. The video shuffles the footage from the “rock” version, slowing down the cuts, lingering on Farrad’s face; it trades the rapid-fire delivery of the first video for a hypnotic procession of images. Many of the shots in the “soul” clip are intentionally blurred and muted, saturated with light, faded; much of it looks like archival footage from the early ‘80s (especially when Farrad rocks a Mohawk!). One arresting image is of the singer’s lips. Covered in sparkling crystals, every word they form feels bejeweled.

We are very excited to be working closely with the Farrad team to bring you these stellar clips. We’ve got copies of The Time Is Now for you to enjoy and for your on-air giveaways so don’t be shy about requesting copies! If you need more info, call Andy Gesner at 732-613-1779 or e-mail us at info@HIPVideoPromo.com. You can also visit or www.Farrad.com to find out more about Farrad.

For info about Farrad’s previous video, “Pick Your Face Up Off The Floor” click HERE