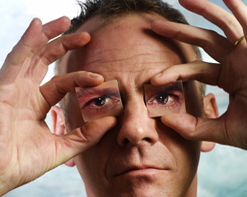 Hello music video lovers! It’s Andy Gesner and the staff from HIP Video Promo back with another booty shakin’ clip! For an internationally-famous pop star and deejay, Norman “Fatboy Slim” Cook is remarkably self-effacing. His tracks may circle the globe and burn their way into the popular imagination (who can forget how Fatboy and “the funk soul brother” turned the entire summer of ’98 into a Rockafeller Skank” singalong?), but Slim himself usually shies away from the camera. Instead, his award-winning videos have always been platforms for the creative and interpretive talents of others. Constitutionally generous and instinctively celebratory, Fatboy Slim is the quintessential deejay for the masses – keeping the party going with enthusiasm, excitement, and a curator’s eye for offbeat guest stars.

Moreover, for all his cutting-edge electronic exploration of his music, Fatboy Slim also seems particularly enamored of lo-tech forms of cultural expression. (He’s also seemingly on a mission to prove that great clips can be shot on a shoestring budget; rumor has it that the landmark “Praise You”, which regularly tops critics lists of the greatest videos ever made was shot for a mere $800.) The fictitious “Torrance Community Dance Group” who starred in “Praise You” video was the embodiment of infectious d.i.y. local spirit. And while Christopher Walken’s gravity-defying dance routine in the “Weapon Of Choice” clip may have evoked The Matrix, it was, at heart, traditional soft-shoe choreography. So perhaps it’s not surprising that for his latest clip, Cook and director John Watts have chosen to enlist the talents of: a juggler.

But not just any juggler. Comedian Chris Bliss is to balls in the air as Penn and Teller once were to the stale conventions of the magic show. Bliss’s act isn’t so much about feats of dexterity as it is about emotion, exuberance, and a strange and near-spectral relationship to the music he’s complementing. His routine timed to accompany the final four minutes of Abbey Roadhas already become a YouTube legend, and has spawned imitators and parodists. Here, he applies his choreographic method to Fatboy Slim’s latest single – and the result is a video that dazzles and hypnotizes without special effects or a big budget.

“That Old Pair Of Jeans” starts with rocking-chair electric piano, and Bliss begins his interpretation of the song with a see-saw one-handed juggling trick. But once the big beat kicks in, he’s a whirl of arms and legs and tennis balls, snatching, grasping, and lunging slack-jawed – and always right on the beat. As Lateef the Truthspeaker (of Solesides crew Latyrx) sings his story of disappointment and longing over the slamming Seventies-style soul track, Bliss seems to embody a kind of desperate longing and perseverance in the face of adversity. Watts changes the camera angle from time to time and occasionally pans back to give us reaction shots of an enthralled nightclub audience, but for the most part, he shows us the juggler – and that’s more than enough to captivate us. In a typically democratic move, Cook has thrown open the door to his fans, challenging them to make their own juggling video for “That Old Pair Of Jeans”. The winning entrant will be announced on MySpace and featured on the enhanced version of the second single.

“That Old Pair Of Jeans” accompanies the release of Why Try Harder – a greatest-hits package that firmly establishes the deejay as the most egalitarian and flexible figure working in electronica. “Right Here, Right Now”, “Rockafella Skank”, “Praise You” the chart-topping remix of “Brimful Of Asha” – the songs that defined summer for so many are all here in one package. More notably, the set also includes some of Fatboy Slim’s best songs from Palookaville: a less-sampladelic album that featured live performances and some guitar tracked by Cook himself. Some forget that he started out – four million record sales ago – as the bassist for the Housemartins. And he remains, at core, a traditionalist record collector with an unparalleled skill at coaxing old-fashioned rafter-shaking music out of the latest technology.

Here at HIP we are so stoked to be working with our friend Krista Crews and the great folks at Astralwerks to bring you this summer’s dance hit! We will have plenty of copies of The Greatest Hits – Why Try Harder? CD for all of your on-air giveaway needs. If you need more info, call Andy Gesner at 732-613-1779 or e-mail us at info@HIPVideoPromo.com. You can also visitwww.Astralwerks.com to find out more about Fatboy Slim.