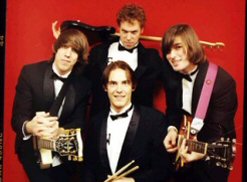 Hi everyone! It’s Andy Gesner and the staff here at HIP Video HQ with another outstanding video from our good friends at Doghouse Records. 2003 brought you so many cool clips from Doghouse (Limbeck, Celebrity, Sunday Driver) that it is a certainty that because of your courageous, unyielding support, this Ohio based indie rock hit factory will continue to churn out fantastic videos all throughout the new year! The first to hit your desk is the fun filled frolic of Doghouse’s next big thing, Feable Weiner. This Tennessee based, guitar driven quartet were able to cajole their friends and former labelmates The All-American Rejects to star in this joyous romp.

Most of us probably discovered Rock n’ Roll during our early teens – and Feable Weiner’s “San Deem Us Ready” is a throwback to those Junior High days when all food was greasy, all teachers were evil, and a guy’s main goals in life were to pass math, steal a few sips from dad’s liquor cabinet, and get a glimpse down the sweater of that girl in homeroom. The setting is decidedly contemporary – a health club in Tennessee. After suiting up (literally); the boys in the band begin to perform in this unlikely venue, only to be ignored by the female patrons, pelted with squash balls, and mocked by the “Doghouse All-Stars” (a cameo appearance by Nick Wheeler and Tyson Ritter from The All-American Rejects). In the end, of course, the Weiner lads win the day in a kind of Revenge of The Nerds goes music vid fashion.

Directed by up and coming indie rock director Zach Merck (Limbeck, Sunday Driver) , the clip relies, visually, entirely upon impeccable craftsmanship in the lighting, cinematography, and editing – and upon the band’s energetic performance and geeky-cool charisma. As in Merck’s previous work, he adapts himself to the band’s style rather than imposing himself on them. The result is delightfully tongue in cheek, including a suitably captioned “product placement segment”.

Musically, the song is quite energetic and bright, with a guitar intro that would have done Joe Strummer and Mick Jones proud. The similarity to The Clash ends with the first vocals, though – Atom Andersen, Josh Watson, and Ben Harper pull of some nifty harmonies.

We are going for adds for “San Deem Us Ready” in February and we have tickets to see Feable Weiner as they tour all across the country. Call Andy Gesner at 732-613-1779 or you can e-mail info@HIPVideoPromo.com
for more info, and if any programmer wants to do an interview we can hook it up in a heartbeat! Any programmer that adds the video in February will automatically be entered in the “Doghouse All Stars” contest. Each programmer will receive Dear Hot Chick CDs and cool Feable Weiner t-shirts for on air giveaways. On April 15th there will be a drawing of all the programmers that have added the clip and the winner will receive the complete Doghouse Records catalog and a very special Feable Weiner prize package!