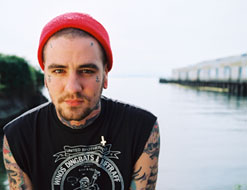 Greetings programming friends, it’s Andy Gesner and the hardworking crew at HIP Video Promo. We’re writing today to spread the good word about a Seattle band – Fences – and their dazzling self-titled debut. Everything about the single, “Girls With Accents,” is gorgeous. Lead singer Christopher Mansfield’s heartbroken vocals, crackling with anxiety and self-doubt is beautiful and relevant. This a record that romantics will turn to during sleepless nights, that skeptics will listen to with a bobbing head of approval: it’s a sturdy ship to get listeners through the raging storm.

“Girls With Accents” is the standout cut on Fences, but it is by no means the only song on the album that fits the description above. The other nine songs on the record share with “Girls…” its penetrating honesty and rare beauty. Mansfield, who writes straight from his aching heart, has seen to the first part; producer Sara Quin (of Tegan & Sara) has seen to the second.

Fences shares Tegan & Sara’s pop-sensibility, balance and poise among emotional turmoil. Quin fell in love with Mansfield’s self-released EP and the Fences LP is the product of fevered sessions at her home studio in British Columbia. The world has begun to take notice. Mansfield’s reputation has now spread far past his native Seattle. He’s earned positive notice for Fences in Nylon, Spin, and other internationally-recognized publications.

Vocally, Mansfield has earned merited comparisons to Conor Oberst, Elliott Smith, and Scott Hutchinson of Frightened Rabbit. He’s shared stages with St. Vincent and Mark Kozelek. This autumn, the band is embarking on a full US headlining tour in support of the record and just signed with the prestigious Primary Talent International for touring outside the US.

The music video for “Girls With Accents” is a domestic hallucination playfully interpreting the song’s thesis of excess. It’s a reverie so strange and wonderful that you’ll find yourself looking at impossible things without even realizing that you are.

The camera catches Chris Mansfield at home in an ordinary apartment such as a young musician might inhabit — there’s a stereo system against the wall, an old-fashioned kitchen, and a black puppy at his feet.

But as Mansfield goes about his daily tasks, the room slowly changes, his clothes magically increase in size and soon a pile of clothing becomes a heap that swallows the entrance to a closet. Living room chairs multiply quickly until they fill the room -stacked floor to the ceiling. (Mansfield climbs the strange monument all in effort to change the record that’s playing on the other side of the room.) Kitchen plants become trees, which become a jungle that he tries to escape. And as he fights his way through the branches, he finds himself surrounded by people: they push and shove him, angling for position on a crowded floor. By the end of the clip, Mansfield’s ordinary quarters are entirely denaturalized in excess: there’s a world inside the world he’s living in, and it’s breaking through the barriers of everyday reality.

Here at HIP we are thrilled to be working with Fences’ management team: Christen Greene at Fuzed Music to bring you this stellar clip from an up and coming artist totally worthy of all the attention he is receiving. We’ve got copies of Fences on hand for all of your on-air giveaway and contest needs, and would love to hook you up with the chance to meet up with Fences this month for a video interview when they come to your market on tour!