Fever Ray “When I Grow Up” 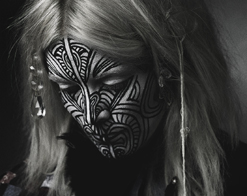 Hello fellow indie music connoisseurs, it’s Andy Gesner and the staff of HIP Video Promo. A woman dances at the edge of a diving board suspended over a disused backyard pool. She’s dressed in furs and rags, like a shaman — and her movements have the mysterious quality of a ritual. The pool is filled with water, but it hasn’t been cleaned; it’s choked with leaves and cloudy with dirt. As the enchantress gyrates, bubbles rise to the surface. She’s summoning something from the depths, conjuring a beast into life, but we can’t see what it is or how she’s doing it; like the creepy man who looks on from the safety of an abandoned summer shack, we’re witnesses to a spectacle both arcane and primal.

So goes “When I Grow Up”, the latest video from Fever Ray, and a worthy successor to the terrifying clip for “If I Had A Heart”. The “Heart” video was a true horror show: thick gloom, swirling mists, and bodies strewn around the grounds of a manor house. Yet as disturbing as it was, there’s something even more unsettling about the “When I Grow Up” clip. Remarkably, Karin Dreijer Andersson and Fever Ray are able to shake us without running up the body count at all; her imagery speaks to something deep, chilling, and unshakable within our collective consciousness. No wonder, then, that Prefix Magazine recently boasted that Andersson “currently has the market cornered on spooky, atmospheric videos.”

The spell wouldn’t work anywhere near as well as it does if the music wasn’t so evocative. Fever Ray, the self-titled album from Dreijer Andersson’s latest project, is a dark siren song: alluring, provocative, subtly-textured and immediately hypnotic. The album feels like a dangerous trip, and listeners all over the world are getting lost in the grooves. “The more time you spend with Fever Ray”, explains Mark Pytlik in a Pitchfork rave, “the more you become convinced that these songs aren’t written so much as they’re temporarily let out. They’re too starved, too eerie, and too transfigured to have been anything but.”

Danish director Martin de Thurrah (Glasvegas, Will Young, Royksopp) began his artistic journey as a painter, and his appreciation of vivid color is apparent in the “When I Grow Up” clip. The swimming pool glows an otherworldly blue-green, the shaman’s rags and furs are bold ochre, and the ruined campsite is a verdant mess. It’s a scene of decay, but also one of growth and possibilities; far away from the lights of the city, it’s the perfect location for strange experimentation. De Thurrah amplifies the drama (and the weirdness) by treating the viewer to a few uncommon camera angles: at times, he positions the lens right at the surface of the pool. Brackish water swirls, and something seems to be agitating the bottom of the frames. He closes in on the lips of the magician; face stained with dirt and paint, she’s muttering some kind of incantation. It seems almost impossible that she could keep her balance on the narrow diving board — but somehow she does. She’s in a trance, impervious to the tension created by de Thurrah’s audacious camerawork, and Dreijer Andersson’s haunted music.