Fiorious “I’m In Love With A German Film Star” 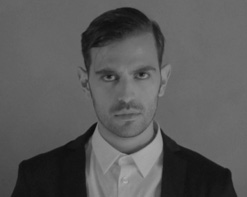 Fiorious is a Bronx-born Italian-American Ivy-League grad who fearlessly embraces his European roots without sacrificing his New York City soul. Imagine the cross-breeding sounds of the Gossip-meets-Groove Armada, Hot Chip-meets-Hamilton Bohannon, Junior Boys-meets-Jamiroquai, !!!-meets-Chic, Roisin Murphy-meets-Rick James and you’ll begin to scrape the iceberg that is the massive imagined musical landscape of Fiorious. Full of vigorous passion, Fiorious abandoned his stable gig as a music critic at Entertainment Weekly to create art and beauty instead of just rating it. After travelling Europe for a year and honing his sound, the DIY star settled down in Italy and crafted his unique tribute to the music that assembled him.

“I’m In Love With A German Film Star” was originally made famous in the new wave underground scene in early 1981 by The Passions, a name that anyone who is a big fan of the era is familiar with for this track. The song was originally written by the female frontwoman Barbara Gogan about a one-time roadie for The Clash and the Sex Pistols, Steve Connelly, who had minor roles in several German films. However, Fiorious takes the song and makes it his own, reconfiguring all of the instrumentation to match his retro modern sound. The track is full of delayed 80’s New Order style synth that is clashed with a phasing house beat to keep fans of old and new schools dancing from start to finish. However, what really set this track apart is the vocal delivery, full of vibrato and gentle yet far-reaching range. You will be pleasantly surprised that this retro pop connoisseur is more than adequately equipped with pipes to match and surpass his obsession.

Drawing inspiration from the era and from his locale, Fiorious has refined his image to maximum perfection. The video is shot in sharp, crisp black and white, full of Italian elegance (in fact, it was shot on location in Turin, Italy) that can be comparable to Rob Marshall’s recent visual masterpiece “Nine,” or even more closely to Christopher Nolan’s “Following,” which features a man who picks strangers and follows them around to discover bits and pieces of their life. The video is centered on Fiorious as he walks the streets stalking a girl who does not notice him there. As she goes about her business, which, as you can guess, has something to do with being famous, Fiorious perversely creeps behind her watching her in admiration, but never interfering with her trajectory. However, one look at Fiorious will put any one being stalked by him at ease, as the man has refined his combed, clean-cut, buttoned-down style, ready to steal the heart of anyone who notices. In the end, the girl does, in fact, notice Fiorious, but we’ll leave the consequence for you to decipher.

Fiorious’s clever and well organized persona has not gone uncelebrated as the internet begins to buzz of his presence. Most recently, Fiorious has caught the attention of Pop Sucker and Instant Hits web magazines who rave that “the new king of electro-funk is hard to classify, and hard to resist” and as “Jamie Lidell fronting Franz Ferdinand with Hercules & Love Affair on production duties,” respectively. Not to mention his Facebook page has exploded to 13000 fans in just a few short months off of the strength of some incredible word-of-mouth. The bi-continental indie prince is currently travelling between New York, the UK, and his home in Italy promoting the I’m In Love With A German Film Star / Elevator EP.

Many thanks for letting us bring you this killer and stylish clip. We hope you will give it the treatment and attention it so highly deserves. Also let us know if you would like any Fiorious goodies for your on-air contest or giveaway needs. If you need more info, call Andy Gesner at 732-613-1779 or e-mail us at info@HIPVideoPromo.com. You can also visit www.Fiorious.com to find out more about Fiorious.