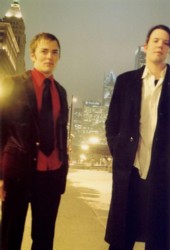 Hello, everyone! It’s Andy Gesner and the staff from HIP Video Promo. If you’re like us here, you appreciate the intricacy and thoughtfulness of indie clips – but you wouldn’t mind it if alternative artists and video directors added a bit more sex appeal. Decadent as they are, The Firebird Band are one indie act who aren’t afraid to show us something enticing. Christopher Broach and John Isberg are ironists and sybarites, abstract illustrators, and perhaps even cultural critics. But there’s nothing self-conscious or measured about the very sexy clip for “Satellite Delay” – a perfect companion to the brilliant, fragmentary City At Night, and a perfect expression of indulgence and glamour under the metropolitan lights.

Christopher Broach is probably best known as a founding member of Braid, the Illinois proto-emo act that did so much to define the parameters of nineties underground guitar rock. But fans of the pop-punk Braid would be forgiven if they were initially taken aback by Broach’s direction in The Firebird Band. Here, instead of the distorted six-string roar, he’s crafted digital soundscapes from samples, breakbeats, cool synthesizers, and processed acoustic instruments. Like The Postal Service – an act that The Firebird Band sometimes resembles – this group brings the emotional intensity of indie rock to arch, sophisticated chillout electropop.

Initially conceived as a side project, The Firebird Band has evolved into a musical entity as multifaceted and absorbing as Braid ever was. If Firebird debut Setting Sun And Its Satellites, was dizzy, evocative, but intentionally incoherent, The City At Night is the sound of a complicated act finding its footing. The tickertape clatter of the machine hi-hat and the transistorized buzz of the analog synthesizer frame fourteen wild, hypnotic tracks that meld techno, emo, Euro-pop, and even some Beasties-style hip-hop. Broach sounds alert, energetic, and amusingly paranoid throughout, spinning fractured stories of cold Los Angeles nights, emotional fascism, sexual intrigue on urban balconies, expatriates, fashion, sex, skin on skin. It’s all reminiscent of Bowie’s landmark Berlin-period albums – an odd, fascinating amalgam of lust, emotional detachment and raging passion.

The City At Night reveals Broach and Isberg as rap fans, and the clip for “Satellite Delay” subtly reflects that. This is no Hype Williams video – but it does contain elements that’ll be familiar to anybody who watches playa emcees strut their stuff onMTV Jams. The duo is shot in the plush backseat of a limousine; champagne is flowing, and they’re surrounded by beautiful women. Broach talks on his cellphone as a gorgeous blonde kisses his neck. Is this satire?

Well, yes and no. The Firebird Band is undeniably playing with convention here, and giggling behind their makeup masks. Parts of the clip are lip-synched; other moments find Broach singing demonstrably and emotionally, but obviously not performing this particular song. The effect is disorienting – especially since director Bradley Scott usually chooses these moments to slow down the film. Interspersed as it is with shots of the urbane revelry in the back of the limo, it only adds to the pervasive sense of decadence. What isn’t parody, though, is the legitimate sexiness of the slo-mo scenes in the car. We see shoulders, legs, lips, fingers entwined; the full proxemic algebra of flirtation. Girls teasing and kissing other girls in videos can be gauche and exploitative, but here, it’s so artful that it’s bound to get your heart racing no matter what your sexual proclivities are. So to the Firebird Band we say: thank you.

The Firebird Band will be on tour in the US this spring, so please get in touch with us at HIP Video Promo if you’d like to set up a video interview or video ID when they are in your area. We also have a supply of CDs for giveaways. If you need more info, call Andy Gesner at (732) 613-1779, or email info@HIPVideoPromo.com. You can also visit www.bifocalmedia.com or www.lucidrecords.com to find out more about this provocative new duo.