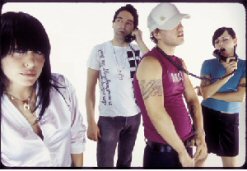 Hello, everybody! This is Andy Gesner and the staff from HIP Video Promo writing with more exciting news. We are pleased to send you the first video from a new client of ours that’s just beginning to make waves on the national scene – The Fitness.

The quartet has burned through the Seattle underground, and is now receiving wider attention for their audacious fusion of austere electro rhythms, brittle Euro-cool and the garage aesthetic of the new millennium. Acerbic commentators and synth-punks extraordinaire, the Fitness combine distorted Moog, processed guitar, off-kilter rhythms, and their own charmingly corrosive attitudes to produce a danceable discourse on digital-age dysfunction. Imagine an updated Blondie with an injection of aggressiveness – and a stance even more jaded, if that’s possible – and you’ve got a pretty good idea of the stylish energy the Fitness communicate on Call Me For Together, their manic debut.

Any group willing to rhyme “Gianni Versace” with “Joanie Loves Chachi” is drawing from a deep pool of referents and associations. The Fitness brings their pop-cultural erudition to bear on their milieu: their album features brilliantly-detailed and often scathing descriptions of a jet-set gone mad. Lead single and video “Day Job” finds the quartet at their most scathing; yet they never forget to make the scene they’re lampooning seem compelling despite (or maybe because of) its superficiality. “Small talk used to make me ill/that’s all changed/now I’m on Paxil”, drawls vocalist Bree Nichols, finding that chemical sedation makes it possible to chat up a friend on the dance floor. Her character is detached, self-absorbed, too drugged to be properly witty, yet she’s sympathetic anyway – and not just because Nichols reminds us that the club-crawler needs to be at work three hours after the party’s over.

You’d expect the clip for “Day Job” to be stylish, and it is: the mixed-gender group looks casually smashing in their laid-back chic threads. The camera captures Nichols’s lipstick-sneer as surely as it does her bandmates’ arch disaffection. Yet while the action in the song takes place in a crowded disco, the “Day Job” video is set in a warehouse – abandoned except for the group and their P.A. speakers. A commentary on the emptiness of the club scene, or just the solipsism of the main character? Nichols isn’t saying. She addresses the microphone like she’s challenging it, or perhaps kissing it off like a club-goer foolish enough to think he might get lucky.

No piece like this would be complete without clones, and the “Day Job” video produces them in spades. Each band member dances and interacts with copies of themselves – often five at a time, swaying and posing to the music, occasionally turning into each other. Nichols even gets to watch, lasciviously, as a second copy of herself makes out with a third. How decadent – or narcissistic – can you get? Completing the closed circle of self-obsession, all of the action in the video is performed for the benefit of the band, who sit idly in the foreground, watching the proceedings with hipster cool.

Here at HIP Video Promo we’re stoked to be on board with this hot new promotion, and we’ll be prepared to meet your Fitness needs in a timely fashion. We have plenty of copies of Call Me For Together for on air giveaways. The band will be on tour through the end of July opening for The Scissor Sisters, so if you would like to see them and arrange an interview, please give a shout. If you need any more info call Andy Gesner at 732-613-1779, or email info@HIPVideoPromo.com.