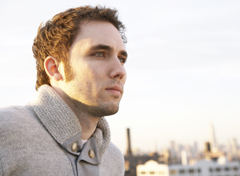 Greetings fellow music lovers! It’s Andy Gesner and the staff from HIP Video Promo, back with another terrific clip from a resolutely independent artist. Here at HIP, we love Internet success stories – tales of musicians who’ve turned new technologies to their advantage, and spread the word about their projects without requiring assistance from major labels. Five Times August may have taken an unconventional route to pop notability, but it sure has been an effective one: this true independent act is poised to explode into the national consciousness in 2008. Austin resident Brad Skistimas – the man behind Five Times August – has rock-star looks, the energy and industry of an entrepreneur, and the soul of a D.I.Y. visionary. And he’s not afraid to elbow his way into heady company: he’s the first indie to have his records sold in Wal-Mart nationwide.

That sort of thing doesn’t happen without a solid base of support – and Five Times August has built its audience through relentless touring, shrewd licensing, and by clever exploitation of online resources. Skistimas has placed his songs in Laguna Beach (he’s on the official soundtrack), One Tree Hill, and other major network television programs. He’s sold tens of thousands of digital downloads through online distributors and social-networking sites, and moved thousands of copies of his independently-produced CD via virtual retailers. Skistimas loves the ‘net, and the Internet loves him right back: just this month, Five Times August was featured on About.com as an “Artist In The Wings”, on Windows Media as an “Artist On The Rise”, and Napster.com (always a FTA supporter) as a staff recommendation. If it seems like the entire World Wide Web has come together to give a push to Brighter Side, his upcoming release, remember: he labored assiduously to cultivate those relationships. Now that hard work is paying off.

Brighter Side is, on its surface, an approachable and direct record: one man, one voice, one acoustic guitar, and a clutch of warm, welcoming, instantly identifiable tunes. It’s immediately clear why television producers have sought out Skistimas’s music – it’s softly emotive, quietly cinematic, the perfect score for a reflective moment. “The Good Life”, the lead single, may share a title with Kanye’s latest, but in tone and theme, it couldn’t be farther from Mr. West’s tale of red-carpeted glamour. Five Times August’s good life isn’t bling-studded; it’s staying in bed and watching the sunrise with his girl.

The clip for “The Good Life” is similarly friendly, endearing, and human-scale. Shot in a mostly-white room on a gorgeous morning, it finds Brad Skistimas sitting at the foot of his wife’s bed, strumming his guitar. He’s not being rude or obnoxious about it, but it’s clear he’d love it if she’d wake up and pay him some affectionate attention. But even after whispering some quietly-seductive lyrics into her ear – grinning impishly all the while – she still won’t open her eyes. The girl tosses cutely under the covers and throws her hair; the singer strums his frustration away. Suddenly, he gets some cooperation from nature (or maybe it’s his own impatience causing the temblor): the entire room begins to shake. Cups fall from high shelves and shatter; framed pictures slip to the floor; the mirror cracks; the television collapses; but nothing breaks the young woman’s slumber. Finally, in a room busted to bits, her eyelids open to find Skistimas in bed next to her, guitar still slung around his neck. She puts her arms around the Five Times August singer as the final frame fades to black.

We are very happy to once again have the opportunity to work with Kristen Worden-Harris and the folks at Croshal Group to bring you this fantastic artist. The new album Brighter Side is a must have so if you would like some copies for on-air giveaways just drop us a line and we’ll hook it up. We would also really like to set you up with a video interview with Five Times August when he comes to your market! If you need more info call Andy Gesner at 732-613-1779, or email info@HIPVideoPromo.com. You can also visit www.CroshalGroup.com to find out more about Five Times August.