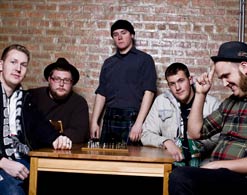 Hello programming friends it’s Andy Gesner and the HIP Video Promo team bringing you an ode to blue collars workers everywhere that happens to look like a million bucks! To say that Flatfoot 56 is a band filled with Celtic punk veterans who are all about supporting the working class is a complete understatement. This quintet celebrated their 10-year anniversary with the release of their latest album Black Thorn just a few months ago, and they’re ready to reiterate what their music is all about with their video for “Courage.” Their fans couldn’t have been more anxious, getting the album to debut at #2 on theBillboard Heatseekers chart, #3 on their top Internet chart, not to mention top 40 Billboard placements on the Alternative Rock and Rockcharts and entry into the Billboard Top 200!

“Courage” takes Flatfoot 56’s appreciation for the working class one step further, essentially honoring them as everyday heroes. In fact, the video does just that – first panning over the massive group of employees overlooking the construction site where they’ll work tirelessly throughout the day and then isolating individuals amidst their tasks. These people are construction workers, welders and even a former navy seal who glances at an old picture of himself in his locker upon lead vocalist Tobin Bawinkel belting out, “You hit the beaches in the Second World War / You carried it with you when you came home.” The video is also beautifully shot, spotlighting these citizens who Flatfoot 56 tries so hard to represent – including an elderly man at the end who opens up his wallet to a picture of his wife and kid, seemingly reflecting on his life – as the band rocks out in what seems like a torn-down church.

Comparisons to other Celtic punk bands ala Dropkick Murphys and Flogging Molly may seem inevitable, but Flatfoot 56 brings to the table a positive party-like energy quite unlike the rest. These Chicago-based rockers are not only dedicated to celebrating the working class, but also their Southside Windy City roots, the camaraderie that they form within the band as well as with their fans, and just overall working hard and getting through the toughest times. Flatfoot 56 is a band all about the delivery and having their words matter, and “Courage” certainly gets that accomplished for them.

Without a doubt, “Courage” sets itself up as a sure-fire anthem, whether it’s because of the train horn sounding off in the beginning of the song or the inherently sing-along chorus of, “Courage, your name means something to me / These heroes, they last through time / Courage, your name means something to me / A champion of the daily grind.” It’s a great foray in to what the rest of Black Thorn has to offer, which AbsolutePunk.net noted, “Through both the silly and the serious, Flatfoot 56 give us a another gift of hope for the hardships of life, encouraging us to sing and dance together.”

Thanks so much to the crew over at Old Shoe Records for bringing this awesome video by Flatfoot 56 over our way. The band will be on tour all summer long both on their own run and then on a large part of the annual Warped Tour and we can promise that they will be hitting a market near you, so please be in touch with us if you’d like to set up any video interviews with the band when they are in town! If you need more info, call Andy Gesner at 732-613-1779 or e-mail us at info@HIPVideoPromo.com. You can also visit www.Flatfoot56.com for more about Flatfoot 56.