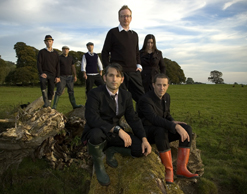 Hello! It’s Andy Gesner and the staff from HIP Video Promo, back today with a gripping video from one of the most incendiary bands in popular entertainment. Best folk-punk band since the heyday of the Pogues? Our money is on Flogging Molly, and we know we’d get no argument from the punters in the pubs and concert halls. Massive arena crowds are getting hip to the septet, too, and the band’s mainstream following just keeps growing. They’ve made repeated splashes at the Warped Tour and The Bamboozle, proving over and over again that Flogging Molly is the type of rock band that can whip young pop-punk audiences into delirium. And they do it without betraying their deep roots in Gaelic traditional music.

Firebrand vocalist Dave King is an Irishman by birth. But while all of his music bears the unmistakable hallmark of his Celtic heritage, Float is the first Flogging Molly album to be recorded in his native country. It shows: not only is the folk instrumentation more pronounced, but the subject matter (especially the stinging “No More Paddy’s Lament” and “Man With No Country”) has taken a bracing turn toward the topical. King has never been shy about his politics – Flogging Molly were major participants in Fat Mike’s Rock Against Bush project – but it’s fair to say that his critical eye has never been sharper than it is on Float. When the Alternative Press called the album “one of the most important of the year, if not the decade”, it wasn’t just Flogging Molly’s killer tunes and energetic performances the magazine was talking about – they were praising King’s incisive, articulate, and literary writing.

“Float” is a rare mid-tempo number from a band best-known for their raucousness, and it’s a gorgeous one. It’s reflective and poised, but every bit as powerful as the flashy rockers. Karni & Saul’s beautiful clip for “Float” is similarly thoughtful, and it communicates the same desperation, turbulence, and passion that animates all of Flogging Molly’s tracks. It follows the journey of a plaintive – but surprisingly expressive – stick figure from atop a filthy table in a city flat to a ride between the waves at the seashore. The character is fragile: he is lithe, but he walks with a limp, dragging a cast of bric-a-brac wherever he goes. From the moment he fastens his little hat atop his head and readies himself for the road, we’re smitten: we’re ready to follow the guy wherever he goes.

He’s dwarfed by the streets he travels and the things he encounters. He inhabits the same world we do, but he sees from a miniature’s perspective. Factories, planes and their contrails, and boats – things that are, to us, enormous – seem particularly colossal and imposing through his eyes. Yet he persists in his foraging: gathering coins and sticks and paper clips, and strapping the refuse to his body. The more he carries, the more he struggles, and by the time he reaches the countryside, he’s too exhausted to marvel at the magnificent vistas. The contrast between the poor depleted stick figure and the dramatic seaside cliffs serves to generate further sympathy for the animated character. By the time he reaches the surf, it seems impossible that he won’t be crushed by the waves, and yet he presses on. The camera switches to the character’s perspective and whitewater slaps against the lens – and that’s where we’re left, wondering about the fate of an animated hero whose heroic endurance we’ve come to admire.

It is a huge pleasure for us to have our first opportunity to work together with the good folks at Side One Dummy Records! If you need more info, call Andy Gesner at 732-613-1779 or e-mail us at info@HIPVideoPromo.com. You can alsowww.SideOneDummy.com or www.FloggingMolly.com to find out more about Flogging Molly.