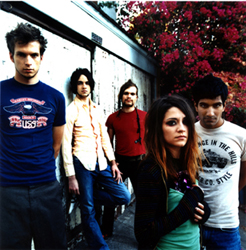 Hi, everybody, it’s Andy Gesner and the staff from HIP Video Promo. Today, it’s our pleasure to introduce you to Flyleaf, a furious female-fronted five-piece with a metal edge and a well-developed sense of narrative and melody. The group has already built a rabid following by touring constantly, and opening shows for comparable groups with national reputations: Breaking Benjamin, Evanescence, Flickerstick, and Bowling For Soup. Flyleaf is set to release a debut album with Octone Records (the label home of Maroon 5) this year. Fans of heavy music are already salivating.

Temple, Texas – halfway between Austin and Waco – is not the sort of town in which you’d expect hard rock to flower. It’s a lovely planned community right at the geographic center of the state; one proud of its parks, churches and suburban values. But Flyleaf are natural emissaries from positive, optimistic Temple to the alternative nation. Their tales are fraught with danger and terror, but there’s always something uplifting about their music. Without ever being preachy about it, the band makes its religious faith manifest.

A “flyleaf” is a blank page at the beginning or end of a book – a clean slate to be inscribed on, or an expectant pause before the story starts. Dynamic frontwoman Lacey Mosely embodies both meanings. Her powerful, gale-force vocals carry pain and outrage – but they also express ambivalence, deep uncertainty, and even an unbroken innocence. A deeply communicative singer, Mosely makes sure her elegantly written lyrics are intelligible even when she’s shouting her head off. And no matter how dense the mix becomes, she elbows her way to the forefront

It’s a good thing she knows how to do that, because her ferocious band shows no quarter. Guitarists Jared Hartmann and Sameer Bhattacharya trade riffs like prizefighters exchanging body blows: relentless, pummeling, deceptively dexterous. Bassist Pat Seals and drummer James Culpepper keep things remarkably swinging, even as they stomp and crash and push the band towards new heights of bone-shaking volume. “Breathe Today”, the lead single, is the “pop” song: a softly sung intro, pummeling start-stop verses, a huge, catchy chorus, and a breather-like bridge punctuated by Mosely’s berserk scream.

Flyleaf has earned a reputation as an amazing live act: fans have been startled to see the diminutive Mosely hurl her body with sheer abandon between the flailing, leaping guitarists. The clip for “Breathe Today” captures the band in performance, and it’s bracing to watch. Bouncing up and down in front of their amplifiers, the musicians thrash and swing so violently at their instruments that they appear to be held up by their own centrifugal force. Moseley stands comparably still in the center of the maelstrom, cupping the microphone in both hands; hair down in her face, she addresses the camera with bewilderment and urgency. The wallpaper and carpeting in the practice studio is blood-red, and an unused, beat-up leather sofa stares back at the group. Flyleaf doesn’t sit down

Interspersed with the performance footage are shots of Mosley alone in a seedy bathroom. She checks her forlorn reflection in a scratched mirror, and sings to herself, paces barefoot along the floor, and leans in despair against a dirty sink. As the music crests, we watch her submerge herself in a filthy bathtub filled with brackish water. Sliding downward, her face disappears beneath the ooze – just before she screams, as if waking up from a nightmare

With this our inaugural campaign for Octone Records, we couldn’t be more thrilled to be working with Rebecca Olsen and her hard working staff. Octone Records is well known throughout the industry for their keen savvy in marketing new artists and their firm adherence to the indie DIY grass-roots aesthetic. They are fully committed to making sure that all of your Flyleaf needs are met in a timely fashion. The band will be touring all throughout 2005 and are a phenomenal band to see live. If you would like to set up a video interview when the band hits your market or need more info, call Andy Gesner at (732) 613-1779, or email info@HIPVideoPromo.com.