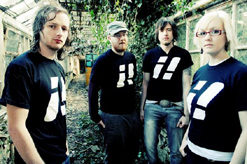 Howdy fellow music lovers, it’s Andy Gesner and the staff from HIP Video Promo, here to share with you a new clip from an exciting new band with a transcontinental audience and a sound to match. Think you’re hip to all the latest dance-rock moves from the UK? If you haven’t heard Forward Russia yet, think again. Their angular, propulsive funk-punk sound has occasionally drawn comparisons to that of Editors, Bloc Party, and Klaxons – but you’d never confuse them with any of those groups. No, the Forward Russia singular take on the dance-rock revolution convulsing the British Islands is dramatic, colorful, haunting, and wholly their own.

Begin with frontman Tom Woodhead – a singer with a remarkably agile voice and an instantly recognizable sound. His melodies are acrobatic, his tone is pure and seductive, his lyrics are dense, his imagery is enveloping and emotionally provocative, and his burning ambition is apparent. Lead guitarist Whiskas spins out wild arpeggios and staccato patterns, bassist Rob Canning hammers out catchy, dub-inspired melodies of his own, and drummer Katie Nicholls holds it all together with a rock-solid backbeat. Give Me A Wall, their infectious debut, was one of the best-loved British albums of 2006 – three singles from the set reached the UK Top 50, and the band starred on the NME New Music Tour. A swing through America with Wolfmother and Fields on the MTV2 Spanking New Music Tour introduced Forward Russia to stateside audiences, and made the band a hip name to drop during ’07 and ’08.

And apparently, the group loves America right back. Forward Russia chose Seattle sonic pioneer and part-time Minus The Bear member Matt Bayles (Blood Brothers, Isis, Planes Mistaken For Stars) to produce their anticipated follow-up to Give Me A Wall. Life Processes is clearer, smarter, tougher, more emotional, and more tuneful than the debut – an explosion of rhythmic six-string scrawls, lockstep bass and drums, synth wails and strange, evocative sounds that don’t seem to have come from any known instrument, and arresting performances by the one-of-a-kind Woodhead. The singer dominates the infectious “Breaking Standing”, a near-pop song that seems destined to replicate the chart success of Give Me A Wall in the UK and firmly establish the band here in the USA.

Paul Morricone’s dreamlike clip for “Breaking Standing” finds the Leeds quartet in a darkened room. Incandescent lightbulbs swing from wires on the ceiling, casting eerie shadows on the musicians’ faces, and throwing washes of light across their bodies as they perform. Katie Nicholls cuts a fetching figure behind the kit; studied, careful, and impassive, she looks the part of the indie heartthrob. But it’s Woodhead who gets the biggest share of camera time, and he makes the most of it, hurling the song at the moving lens as if he’s commanding it to stand still and listen. Behind the band, a woman emerges from an empty bathtub – dancing hands first. Her body writhes, jerks, and contorts as she pulls herself erect; set to the accompaniment, it seems like a strange sort of inward-directed choreography. It’s dance music for introverts and for the slightly unstable, and her interpretive movements are near-hypnotic. Climbing from the tub, she meets Woodhead in a darkened room. She opens her mouth – and roars a cloud of red mist at the startled singer!

Thanks to Stephanie Trick and the Mute staff for getting us everything we need to bring you this awesome new clip. They’ve hooked us with plenty of copies of Life Processes for you on-air giveaway needs, so drop us a line to get your hands on some. If you need more info, call Andy Gesner at 732-613-1779 or e-mail us at info@HIPVideoPromo.com. You can also visitwww.Mute.com, or www.ForwardRussia.com to find out more about Forward Russia.