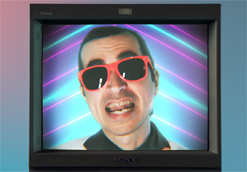 Hanz “Falco” Hölzel was an artist ahead of his time. His bold, international, synth-drenched style of electrofunk anticipated the sound of contemporary pop. Of course, he was hardly unappreciated in the ‘80s: “Vienna Calling,” “Der Kommissar,” “Jeanny,” and especially “Rock Me Amadeus” all became massive hits, influencing mainstream and experimental musicians alike. The members of the Vancouver, BC industrial and electronic band Front Line Assembly were listening, and a little more than three decades after “Rock Me Amadeus” topped the charts worldwide, they’re breathing new life into a song that has never exactly faded away.

The Front Line Assembly version of “Rock Me Amadeus” is just one of twelve scalding new tracks on Wake Up The Coma, the band’s nineteenth (!) studio album. They’ve brought some friends to this party, too: Nick Holmes of the Swedish death metal band Bloodbath contributes his distinctive vocals to the title track, Robert Görl of D.A.F. sings on the kickoff song, and Chris Connelly, who has worked with Ministry, adds his voice to the closer. In the role of Falco, Front Line Assembly has cast Jimmy Urine of the New York City electropunk band Mindless Self Indulgence. Is he as enthusiastic about “Rock Me Amadeus” as the members of Front Line Assembly are? Is there any doubt? Maybe it’s the relentlessly oscillating bass line, maybe it’s the cheeky overtures to a long-dead master, maybe it’s the half-rapped, half-sneered verses in German, and maybe it’s just that Teutonic cool. Whatever it is, there’s no electronic musician – or fan of electronic music – who can resist “Amadeus.”

To bring their version of Falco’s hit to video, Front Line Assembly has enlisted the help of a director with roots deep in industrial and electronic music. Jason Alacrity has shot clips for Combichrist, Astrid, Skinny Puppy, and Stripped Polaris, and he’s made his own ferocious, futuristic electro-rock with his group The Alacrity. His video for “Amadeus” nods, cheekily, to the ‘80s: Jimmy Urine, in red-rimmed shades and a skinny pink tie, appears, Max Headroom-style, on an old Sony CRT television. There’s laser lights, old-school threads, and some vintage video effects, too – and a rotating bust of Mozart under Miami Vice lighting. The clip feels oddly contemporary – brighter and crisper than anything from the ‘80s ever looked. It’s the ideal accompaniment for the reanimation of a classic pop number that always gets listeners singing along.

What a blast it is to team up with Front Line Assembly and Metropolis Records to share the video for “Rock Me Amadeus”! Please don’t hesitate to reach out if you’d like some merch for on-air contests and giveaways or if there’s anything we can do to ensure this video is included in your programming. For more information on Front Line Assembly, please contact Andy Gesner and the HIP Video Promo team at (732)-613-1779 or email us at info@HIPVideoPromo.com. You can also check out www.twitter.com/F7A or www.facebook.com/frontlineassembly for the latest updates.