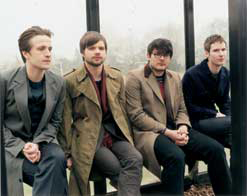 Hello to all of my terrific programmer friends, it’s Andy Gesner and the staff from HIP Video Promo, here with another highly-anticipated new video from a cutting-edge rock band! Back in 2004, The Futureheadscame out of nowhere to startle audiences on both sides of the Atlantic with an eponymous debut that seemed to sum up everything that was great about modern British rock. The songs were blunt, succinct, angular, harmonically sophisticated, maddeningly catchy, and reminiscent of classic work by the Jam, XTC, Blur, and Gang Of Four. In America, The Futureheads was welcomed as the latest – and perhaps most remarkable – flowering of a post-punk revival movement based in the post-industrial British Northeast. Back home, the album made The Futureheads legitimate rock stars, reaching #11 on the UK charts and placing three songs in the Top Forty. Their electrifying version of the Kate Bush classic “Hounds Of Love” broke into the upper reaches of the charts, and was named the best single of 2005 by the NME.

The Futureheads represent Sunderland, a rough-and-tumble Tyneside city that hasn’t always gotten much respect; certainly it is no British hipster district. The band once worked and practiced at the Sunderland Detached Youth Project Center – a social-service center dedicated to giving disaffected kids someplace to go. That was back in 2000: since then, both The Futureheads and their Tyneside homebase have raised their profiles substantially. The quartet has become one of the hottest concert draws in England (and supported the Foo Fighters on their ’05 UK tour), and excitement surrounding the release of News And Tributes, the sophomore album, has been building all spring. Meanwhile, in the summer of 2005, Sunderland hosted the BBC’s gigantic free outdoor concert Big Weekend. 30,000 tickets were given away, and, naturally, The Futureheads were featured performers.

Much ado has been made in the British press about the collaboration with Gang Of Four bassist and producer Andy Gill onNews And Tributes. But if anybody feared that Gill’s production guidance would emphasize the more imitative elements of The Futureheads’ sound, “Skip To The End” proves that the band and their producer are as willing to take chances as any charting act in England. Superficially, all of the musical elements that made The Futureheads such a runaway success are here: start-stop rhythms, abrasive guitar, tight vocal harmonies, witty lyrics, unusual chord progressions and inventive melodies. But they’ve been assembled in an entirely fresh fashion, creating a song that sounds unlike anything the band has done before, but is still unmistakably The Futureheads. “With possibly their best harmonies to date and an oddly hypnotic rhythm, it comes off brilliantly”, raves Stephen Ackroyd on Clickmusic.com. “By the time it hits the shelves it’ll be the greatest song ever – even if it does take a few listens to realise it.”

The clip for “Skip To The End” is sensitively shot by Martin De Thurah, whose work with Rokysopp and other adventuresome Nordic acts won him the Danish Music Award for Best Video Director. De Thurah’s vision is specter-haunted and often unsettling – he brings the chill of the European winter to the songs he illustrates. “Skip To The End” is shot in a snowy English forest, where luminous ghosts dart between the bare trees and long arms reach out from abandoned baby carriages. This is the fantastic psychic landscape of a recently-married couple, sitting together in a hypnotist’s office, mesmerized by a pendulum and a swirling disc. Yet the tone of the clip is not horrific at all; rather, it’s matter of fact, nearly plainspoken, and, thanks to the amusing antics of the band members, even humorous. Dressed elegantly, they stand at attention, trading places before the bride, and stepping forward in unison to sing their four-part harmonies on the chorus.

We would like to thank Sean Maxson and all the folks at Vagrant/Startime International for bringing us in to help promote such a top notch video. Here at HIP, we’re very excited to let everyone know that The Futureheads will be touring the United States this summer and video interviews and IDs will be available to all! Also, we will have plenty of copies of News And Tributes available for on-air giveaways. If you need more info, call Andy Gesner at 732-613-1779 or e-mail us at info@HIPVideoPromo.com.