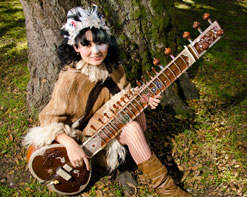 Get ready programmers, it’s Andy Gesner and the staff at HIP Video Promo with a video that’s going to seriously boggle and twist your fragile brain inside that cozy head of yours. There are many pretenders trying to make unique music and then there’s the awesomely extraordinary Gabby La La, whose legacy will make you wonder if she is secretly a superior extraterrestrial who is just messing with our conventions. Gabby La La is a renowned singer and multi-instrumentalist, whose specialties include sitar, ukulele, accordion, theremin and toy piano. Her latest entry, “Alarm Clock,” is an avant-garde statement on our constant battle with time and the universe. This masterpiece of the senses will certainly rattle your imagination.

Gabby La La has made a name for herself by dissolving the definitions of music genre and gaining a following through our desire to break free the norms of our usual listening choices. It should come as no surprise to discover that Gabby has collaborated with none other than Les Claypool on many fronts including opening for Colonel Claypool’s Bucket of Bernie Brains on her very first tour. La La was a member of The Fancy Band for several years and has appeared on many recordings. Claypool produced and released her first album, Be Careful What You Wish For, cast her in his feature film Electric Apricot and performed with her at the release party for her newest effort; I Know You Know I Know. La La is definitely no stranger to the massive festival going crowd either, having performed at outings like Bonnaroo and High Sierra. All of this has helped create a wave of enthusiasm surrounding Gabby as she gears up to support the release of her sophomore solo recordI Know You Know I Know, which hit stores this February.

“Alarm Clock” combines various synths, rings, and clicks to create a sound that the songstress describes as “fun, unique, crazy (and) kooky.” La La takes her listeners through 8-bit, fairy-tailed and surreal worlds of pop and dance goodness in which everyday worries dissolve with the appreciation of tiny and small things, such as sleeping through that damned alarm clock! Visually, you will be immediately struck by the vibrant landscape of color and imagery throughout, and believe us, this is a clip you will need to check out several times to really get a full appreciation for what is going on here. The video perfectly captures Gabby’s charm as she transforms into an electric fairy of time to create a moment of SATORI in the lives of a Bear and a Mad Scientist. She uses a time machine to employ various seasons to her advantage, eventually leading to the activation of the all mighty “cease time” button! The clip is an absolute compliment to the song and personality of Gabby La La in style and zaniness, and transports the viewer into the “Land of La La”.

As the band continues to write and prepare for its second EP, the web is already abuzz about “@Reply” and the prospect of an album’s worth of songs of this caliber. The change-of-heart experienced by the jury in the video’s courtroom scenario, is already happening in the court of the internet. Former haters are quickly becoming believers in Set It Off. “I used to hate this band… Now I like very much,” wrote Iammanhattan on AltPress.com. And that about says it all. Haters can be a negative source of energy on the web, but some bands – like Set It Off – can harness that energy, convert it to inspiration, and come back twice the band they were before.

Join us in traveling the mystified world of Gabby La La by featuring this spectacular otherworldly clip as part of your upcoming programming line up! We’ve got lots of I Know You Know I Know copies here at the office, so be sure to reach out for giveaway materials! If you need more info, call Andy Gesner at 732-613-1779 or e-mail us at info@HIPVideoPromo.com. You can also visit www.GabbyLaLa.com to find out more about Gabby LaLa.