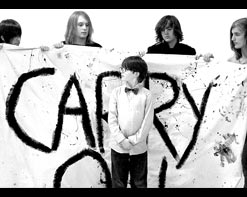 Almost everybody is guilty of slacktivism, “feel-good” measures in support of an issue or social cause, that have little or no practical effect other than to make the person doing it take satisfaction from the feeling they have contributed. When it comes to the story of Colin of Colin’s Friends, however, the boys in Galvanized Souls took the bull by the horns and collaborated with a boy to inspire a community of millions”

The story began when Colin, who has a sensory processing disorder similar to Asperger’s, told his mother in February that he didn’t want a party for his birthday on March 9th because he had no one to invite. His mother, Jennifer, responded by creating a happy birthday Facebook page for her son that blew up with over 2 million likes from friends and strangers around the world.

As fate would have it, Galvanized Souls were looking for a video concept for their anthem “Carry On” which they wrote for their fans who have experienced various hardships in their lives with the message to stay strong and carry on. When Galvanized Souls heard Colin’s story, they immediately felt compelled to step up and show their support in their own way. Lead singer Zakk Silveira said “I saw Colin in me… The story of being the odd guy out at school is something we can relate to. We’ve all been the odd guy out.”

Colin and his family flew out to the West Coast to meet up with Galvanized Souls and their director of choice, the multi-faceted Jared Sagal, head of Rockerrazzi Filmz. The video begins with both Colin and Galvanized Souls in separate narratives. The band rocks and we see Colin’s story of struggles with his peers and fitting in. When they come together and the band drapes Colin a banner reading CARRY ON the true extent of his mother’s love and efforts is revealed in a wall of photographs of those who have shared their support and sent photos to the Colin’s Friends PO Box to come together to give this little boy the best birthday present ever…friends.

We are extremely proud to be working with such a conscientious group of young artists to bring you this anthem of overcoming adversity. It is our hope that you’ll share this positive message and include the video in your programming. Please let us know if there’s anything we can do on our end to help out. For more information please contact Andy Gesner and the HIP Video Promo crew team at (732)-613-1779 or email us at info@HIPVideoPromo.com . You can also visit www.GalvanizedSouls.com and of course www.Facebook.com/Coliniseleven/ for more info.

For info about Galvanized Souls’s “Shut You Down” video, click HERE