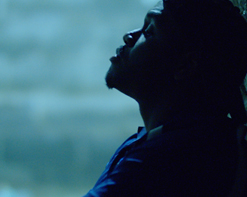 Straight out of Queens, NY comes Germain, one of the most gifted and hardworking hip-hop artists we’ve ever had the pleasure of introducing to our programmers and viewers alike. His no-frills approach to his lyrics and production creates a sound that is genuine, passionate and lasting. For his newest single “Up All Night,” he drops rhymes with a tempo that keeps a listener on their toes as he talks about the hustle and the struggle of following his dreams.

Germain got the bug to write and perform in his early high school years when he was first introduced to Nas on the radio and also began to receive a steady diet of new music from his tight knit circle of older cousins. He began writing non-stop and in his college years had developed his sound and confidence to a point where he knew this would be his life’s pursuit. And while sometimes it can be hard to see the trees from inside the forest, so to speak, Germain has no problem understanding the hard work needed to chase his dreams. That’s precisely what he did for “Up All Night.”

Though Germain says he doesn’t need any motivation to push hard and follow his dreams, it’s clear that work ether itself is the very thing that motivates him. He’s motivated to always be 110% and to be the absolute best that he can be. “Up All Night” is a song with a message that transcends age, gender, or race and delivers a universal message that anyone could visualize.

Aside from the hard work, Germain also had a little bit of luck on his side since one of his influential cousins is also a very talented filmmaker named Wes Darbouze. To create a metaphor for Germain’s message of hustle and hard work, the pair enlisted a local boxer from Brooklyn and made his training and preparation the central theme of the video. It follows him through the gym and his training regimen. Shots of Germain entering the recording studio are spliced in as well and the parallel is drawn between the two. The goals are clear for both, but it’s also important to each that the process is as dedicated and flawless as they can.

We’re very excited to get this video in your hands to help 2016 start right! We’re here to do anything we can to get it into your programming, so please don’t hesitate to get in touch. Please contact Andy Gesner and the HIP Video Promo staff at (732)-613-1779 or email us at info@HIPVideoPromo.com . You can also visit  and http://www.Facebook.com/germain.giego/ for more info.