The Get Quick “Lose It All” 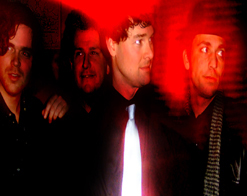 Summer salutations to all my friends and fellow music lovers! It’s Andy Gesner and the staff from HIP Video Promo. We’re always thrilled to get a new video from our friends at Rainbow Quartz Records. We know what that label on an album means – first-rate power pop and neo-psychedelic guitar rock, delivered with the melodic inventiveness of the British Invasion, the brash energy of the Nuggetscollection, and the trippy sonics of Piper-era Pink Floyd. The Get Quick are the latest addition to the Rainbow Quartz roster, and the Philadelphia trio doesn’t disappoint. Produced in roughneck-psych style by a man who knows a thing or two about the genre – multi-talented Mike Musmanno, who helmed The 3 Way, the Lilys’ landmark Sixties reconstruction project – How The Story Goes juxtaposes gorgeous Beatlesque ballads with guitar-and-organ freakouts more reminiscent of the Seeds or the Original Sins. In other words, it’s quintessential Rainbow Quartz music, and a must for fans of power pop or psychedelic revival.

“Lose It All” isn’t the most drugged-out or frantic song on How The Story Goes, but it’s still pleasantly bewildering. Here’s a textbook example of how a psych band can proudly broadcast the mid-Sixties roots of its music while keeping the sound fresh and affecting. The song begins with a propulsive Stax-Volt beat before crashing into an edgy staggered verse; there, the distorted guitar takes the lead as Erik Evol shouts out his fractured narrative. The chorus is even better: a start-stop rhythm, shouts of encouragement, and a swirling combo organ lick that seems to freeze time. Evol punctuates the release with a scream – and in true psych style, the final chorus disintegrates into a whirl of chiming guitars, feedback and cymbal washes.

The video for “Lose It All” is nearly as disorienting as the song – it’s composed of quick cuts, color-manipulated footage, and flashed images of faces and objects. Experienced together, the track and the clip create a strange sort of alchemy: nothing is what it seems, and everything appears poised to transform into something else. For instance, the video begins with shots of flashing white – but it’s only seconds later when the viewer realizes that he’s looking at an extremely high-contrast image of Evol’s face. Likewise, a river of vertical slashes turns out to be the vigorous motion of drumsticks against the snare. So right off the bat, The Get Quick are slamming against the doors of perception, playing around with the mutability of identity and the impermanence of the image.

Footage of the band playing is kept intentionally grainy and flooded with unnatural reverse-processed color – but even these distorted shots can’t disguise that The Get Quick are a ferocious live act. Evol, in particular, addresses the camera with a fierceness borne of relentless gigging. The band was a smash hit at the most recent International Pop Overthrow, and have made a name for itself as one of Philly’s most reliable live acts.

We are very excited to bring you the latest psychedelic gem from our good friends at Rainbow Quartz. We have plenty of copies of How The Story Goes for all of your on-air giveaway needs. If you need more info, call Andy Gesner at 732-613-1779 or e-mail us at info@HIPVideoPromo.com.