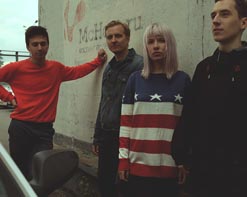 No matter how big the city, state, or country, a good music scene can bring together fans, friends, and artists from all over. Even in a country as vast as Russia! In the case of Glintshake, the story actually begins with Russia’s On-The-Go, whose videos we’ve brought your way in recent months to much acclaim. A part of the rapidly exploding Moscow music scene, both On-The-Go and Glintshake have shared stages and even members at one point with bassist Dmitry Midborn. It’s through this relationship that we were introduced to Glintshake and their explosive and frenetic new video for “Wiuwiuwiu.”

Glintshake formed in 2012 and is fronted by the fiery Cate Shilonosova. Their raw mix of new wave energy and sonic exploration has catapulted them to recognition in their home country. Within 8 months they released two EPs, Freaky Man and Evil, which garnered invitations to several major festivals including Bosco Fresh Fest, Faces & Laces, and the Afisha Picnic. Less than a year after their very first show the band was onstage opening for The Smashing Pumpkins at Stadium Live in Moscow. An impressive resume for 12 months of work!

For their first proper full length album, Eyebones, the band treated us to the wild new video for “Wiuwiuwiu.” A strange name, but as soon as the screaming lead guitar kicks in we can immediately identify the phonetic origin of the song’s title. Combining out and about scenes in the Moscow winter, Shilonosova playing up for the camera at various frame rates, and a whirlwind collage of images, the video itself was shot in one day using nothing more than an iPhone. Combining this footage with the art of director Jenya Gorbunov we are treated to a song that is as explosive and off-the-hook as the song itself.

This song serves as a fantastic introduction to Glintshake and expansion of the Moscow music scene, one of our favorites! Please contact Andy Gesner and the HIP Video Promo crew at (732)-613-1779 or email us at info@HIPVideoPromo.com . You can also visit www.Facebook.com/Glintshake/ for more info.