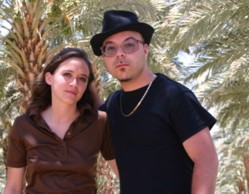 Hi, everybody, it’s Andy Gesner and the staff from HIP Video Promo, back again with another superb video from an emerging independent act. Gold Chains has made his name as a rapper – a San Franciscan emcee with a gift for wordplay and a talent for reaching indie rock kids and hip-hop heads alike. But he’s also a creative producer, and even an engaging singer. Supported and augmented by the winsome Sue Cie, “California Nites” – the lead single from his second full-length and the first for Kill Rock Stars – showcases Gold Chains the pop singer in a musical setting that evokes Prince as much as the Beastie Boys.

Those of us who fell in love with Sue Cie during her sizzling guest appearance on the final track of 2002’s Young Miss America will be happy to know that Gold Chains himself clearly shares our affections. When The World Was Our Friend, the new release, is a legitimate collaboration with Sue Cie – and her stamp is firmly on the album. She serves as foil and alter-ego, a site of desire and identification – commenting from the sidelines, sweetening the mixes, framing Gold Chains’ own gruff vocals, taking her leads with attitude and assurance. The music, too, has changed: it’s poppier, groovier, built on wobbly bass and spaced-out synth, more recognizably Californian in tone.

Certain songs are defined by their bass lines – and “California Nites” has a great one. It’s an immediately identifiable and indelible part, and it guides the listener to a slamming singalong chorus that celebrates the virtues of Left Coast living. Gold Chains and Sue Cie sing almost all of the song in unison, leaning on the bass line, leaning on each other, alternating between spoken sections and sung verses. The single has some of the summertime breeziness that made “Steal My Sunshine” one of the best crossover records of the late Nineties: the chemistry between the two vocalists is every bit as undeniable

The relationship between Sue Cie and Gold Chains is the focus of the immensely charming video for “California Nites” directed by the young and promising director Ruben Fleischer (www.ruben.fm). The rapper/singer begins the clip by picking up his collaborator in his automobile and chauffeuring her; later in the video, she moves to the passenger’s seat. Together, they travel from scene to prototypical Californian scene: a seal-covered beach, mountains, huge sand dunes, wind turbines, cheap motels. Despite his self-acknowledged reputation as a ladies’ man, Gold Chains treats his partner with a friendly respect that borders on reverence. He doesn’t put the moves on her – instead, she leans on his shoulder, and walks beside him as he staggers down the boardwalk. In one of the sweetest sequences of a very sweet video, a sleeping Gold Chains (in a separate motel bed from his partner, mind you) answers the verses of his dozing collaborator. Sue Cie, for her part, remains by Gold Chains’ side throughout the video, echoing his gestures and reinforcing his statements. She’s got his back.

There is no shortage of references in the video – a dark and grainy thirty-second segment evokes the Blair Witch Project. But this is a proudly Californian clip, so there’s plenty of sunshine – pouring in through car windows, bouncing off waterfalls, glinting over highway signs, and streaming between the silhouetted faces of the two vocalists. When the duo pauses on the beachfront to pull a record album from its sleeve, it’s Paul Kantner’s Blows Against The Empire that they flash toward the camera. San Franciscans to the core, these two are.

Thanks to Slim Moon and the crew at Kill Rock Stars for bringing HIP on board to alert you to this delightful video. We have ample stock of When The World Was Our Friend discs to meet any needs that may arise. The duo will be touring throughout November, so if you’d like to do a video interview when they pass through your area or see this dynamic duo live, please let us know. If you need more info call Andy Gesner at 732-613-1779, or email info@HIPVideoPromo.com . You can also visit Kill Rock Stars or Gold Chains’ official site to find out more about Gold Chains & Sue Cie