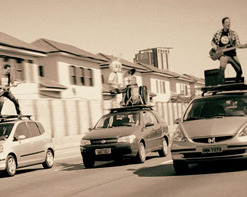 Golden Duck Orchestra is a power trio from São Paulo, Brazil, whose sound is based around a rock and roll core with surprise elements such as pop, Brazilian folk, and electronic styles worked in. On their new single and video, “On Sale,” the band flexes their rock and roll muscle with a thrilling ride that will get the blood rushing and the heart pumping.

Originally operating under the name MegaRex, the band achieved great success in the Brazilian market with their debut album. It was recorded in Portuguese, which allowed the band to tap into the heart and soul of the Brazilian independent music scene, racking up fans, views, and streams all across the southern hemisphere.

It also afforded them the attention and opportunity to travel to some of the biggest music festivals in the world. The band performed at SXSW in Austin, CMJ in NYC, and British Music Week in London. Eventually, they went on a much deserved break to reinvent their sound and refocus their efforts. With a new name on hand, Golden Duck Orchestra is ready to deliver their self-titled album (their first in English). The first offering from that new album is the anthemic, sweeping rocker titled “On Sale.”

“On Sale” is the perfect visualization of the ambitious and outside-the-box nature of Golden Duck Orchestra. This sepia-infused clip starts with the camera riding shotgun in the passenger seat of frontman Flavio Marchesin’s car as he rolls down the freeway of São Paulo. In the cars to his side are his bandmates, who begin passing their gear out the window their cars. After passing the camera off to another vehicle, Flavio and the crew climb on top of their cars, and rock out in the most daring fashion. You heard it right, they cue up the song while on the roofs of their cars blasting down the city streets! Passing cars are eager to show their appreciation and the band responds in kind with a no-holds-barred performance! How did they manage to pull off this rock and roll surfing act? Let’s just say it takes quite a bit of ingenuity and resourcefulness to pull this off!

It’s very exciting for us to have the opportunity to work with the guys in Golden Duck Orchestra to bring you this exhilarating new video. Let us know what we can to get this video into your programming. Please contact Andy Gesner and the HIP Video Promo team at (732)-613-1779 or email us at info@HIPVideoPromo.com. You can also visit www.GoldenDuckOrchestra.com or www.Facebook.com/GoldenDuckOrchestra for more info on Golden Duck Orchestra.