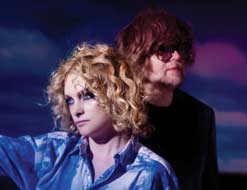 Over the past decade, Alison Goldfrapp and Will Gregory have proven themselves masters of many styles: glittering post trip-hop on Felt Mountain, glam rock on Black Cherry, day-glo club music onSupernature, and spectral, trippy British folk on the heralded Seventh Tree. But infectious dance-pop is what Goldfrapp is best known for, and Head First, their upcoming release, promises plenty of it. “Rocket”, the lead single from the album, is a dazzling, silky-smooth, irresistibly-catchy pop confection, highlighted by Will Gregory’s rich palette of synthesizer textures and Alison Goldfrapp’s reliably magnificent vocals.

The duo have nodded toward the early Eighties on many occasions, but perhaps never as vigorously as they do here. “Rocket” plays like a lost new wave classic — right down to lyrics promising escape velocity. American audiences have responded, and enthusiastically: the single leapt onto the Billboard Hot Dance/Club Songs chart, and is presently threatening the Top Ten. On the other side of the Atlantic, “Rocket” is already in heavy rotation on mainstream radio, and the single has stormed the U.K. charts. There, it joins the fifteen other Goldfrapp singles that have hit the British Top 100. There may be more reliable hitmakers in contemporary England, but no band with an experimental pedigree has done a better job of penetrating mass consciousness.

The clip for “Rocket” helps to demonstrate why: it’s eye-catching, colorful, dangerous, and sexy, and it extends the band’s track record of provocative videos. Alison Goldfrapp has always carefully tailored her visual iconography to match her music — even dressing as a clown to accompany the release of Seventh Tree — and we’re pleased to see that she’s at it again. Here, she’s a ridiculously-sexy truck driver behind the wheel of an eighteen-wheeler, toting her explosive cargo across desert terrain. A gigantic, radiantly-phallic hot pink rocket is strapped to the flatbed of her truck, stuffed animals hang from the ceiling of the cabin and bobbleheads bounce on the dashboard. And in the passenger’s seat, a man sits — duct taped from head to toe, with a slit cut away to expose his terrified eyes.

Like Head First, the “Rocket” clip is a clever homage to the early Eighties and the dawning days of MTV. The bold desert colors are straight from the ZZ Top/Tom Petty “You Got Lucky” playbook, and a few of the prominent shots — like those of Alison Goldfrapp’s legs reflected on the chrome fender of the eighteen-wheeler — are positively iconic. The clip begins and ends in a wash of orange smoke, and the supersonic climax finds the pop singer ridding herself of her boyfriend by taping him to the interstellar launch. The result?: a video that’s funny, playful, and audacious, and an absolute joy to watch.

We’re once again proud to be working with Mute Records to bring you this exciting new clip. If you need more info, call Andy Gesner at 732-613-1779 or e-mail us at info@HIPVideoPromo.com . You can also visit www.Mute.com or www.Goldfrapp.com to find out more about Goldfrapp.