Gottweist “Weight of the World” 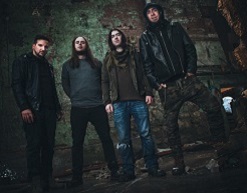 Hailing from the depths of Hell and under the coat of an unsuspecting fog in the night, Gottweist comes back from the dead to seek and destroy with the weight of the world on their shoulders. Accompanied by a modern metal influence, a unique spin on the genre, and a mixture of clean vocals, when they get their hands on you, you better believe that it is over. With the future in their hands, many people find immense meaning in the music and preachings of Gottweist. With excellent virtuosity and different variations of hard rock/metal they set fire to their post-hardcore world and watch it burn.

Forming in the south shore of Montreal, these group of rockers found their match made in heaven in 2005. Influenced by Iron Maiden and Bullet For My Valentine, they play with heavy metal production, lyricism, and vocal delivery to shout out to the world that has wronged them. Standing together, the band consists of Marco Lavigne (vocals, guitar), Alex Soucy (guitar, backing vocals), Alex Myers (bass), and Kevin Lacoste (drums.) Their otherworldly sounds can be seen at the Loto-Quebec scene at the Festival Rock Tes Regates de Valleyfield among many other gigs across Quebec. Ripping their souls apart for public display, their first self-titled project was released in 2013 which was later followed by their debut album Future Is in Our Hands in 2015. Rewriting and redirecting their prophecy, they break their reoccurring harmful cycles with “Weight Of The World”, the lead single off their upcoming project. They have already set the lighter fluid on the world are ready to send the scene up in flames.

Their music video for “Weight Of The World” is certainly heavy. Located in an abandoned old factory, they are bringing these lost souls back to life with their heavy guitars and intense drum lines. In the dead of winter, they wander the cold surface of the world, with lyrics such as “no more repression, they rip your soul until you disappear” to highlight the coldness they feel in their soul. With quick transitions and various close-up shots of the band, the video is filled with high paced energy fueled by hate. Supported by their screamo background vocals and callouts, the message certainly gets across with caution. The video closes as more fuel is added to the fire- gone forever but never forgotten.

We’re honored to be working with Gottweist and the fine folks at Collective Wave Records, and we hope you embrace the new clip for “Weight Of The World” as much as we have here at HIP Video Promo! We’d be thrilled to see this video added to your cherished programming and online presentations in a timely fashion, so please check it out as soon as you can. Rest assured we’ll have plenty of Gottweist merch available for on-air contests and giveaways, so if you’d like to get your hands on some, we’re here for you. For more information on Gottweist please contact Andy Gesner and the HIP Video Promo team at (732)-613-1779 or email us at info@HIPVideoPromo.com. You can also check out instagram.com/gottweist/ and facebook.com/gottweist/ for recent updates on this talented musical tsunami.