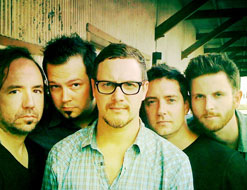 Hello, programming pals! It’s Andy Gesner and the rest of HIP Video Promo fired up about the latest rock super-group ready to make waves. The Gracious Few is armed with members sporting true rock and roll pedigrees, and they’ve brought quite an attention-getter with their video for “Honest Man.”

It’s a pretty straight-forward performance video that is stripped down to the quintet performing “Honest Man” in a setting reminiscent of a practice space. The camera offers cool perspectives of The Gracious Few as it randomly shakes and blurs out individual band members in the foreground and background. Despite the spotlight tricks and incorporation of different shadows, in the end, it’s really an intimate view of the band in their most natural state.

Typically, when a rock super-group is formed, it is merely a collective side project for members of some of the biggest groups of their respective genre. However, this is not entirely the case for the boys of The Gracious Few. Last year Live guitarist Chad Taylor unearthed some old material and at the urging of his fellow bandmates – drummer Chad Gracey and bassist Patrick Dahlheimer – the trio were on the hunt for the perfect frontman to stage the ultimate comeback. That’s when Candlebox vocalist Kevin Martin came into the picture alongside his fellow band member, Sean Hennesy, who would later serve as the driving force behind The Gracious Few’s powerful guitar solos. What resulted was a collaboration that exuded pure, unadulterated rock and was heavily influenced by seventies icons like Led Zeppelin, AC/DC and The Rolling Stones. We’d expect nothing less from a group that has collectively sold over 30 million albums!

“Honest Man” is The Gracious Few’s first introduction to their self-titled debut, due out in mid-September. On top of the band’s killer lineup, the album’s got some additional star power behind it, courtesy of producer and former Talking Heads member Jerry Harrison and Grammy Award-winning mixer Tom Lord-Alge (whose long list of work extends to Marilyn Manson, The Rolling Stones and Blink-182). Taylor has been quick to point out that, “We knew what type of album would get us excited. We were pissed off and sick and tired of the status quo. We wanted a return to music that wasn’t careful to please the masses. We had that with our previous bands.”

Surely, seeing The Gracious Few in the space that they’re in with the “Honest Man” video will get you pumped up for when the band hits the road in the fall. It’s a pleasure to be working with this super-group and the team over at Questionable Entertainment. If you need more info, call Andy Gesner at 732-613-1779 or e-mail us at info@HIPVideoPromo.com. You can also visit www.TheGraciousFew.com to find out more about The Gracious Few.