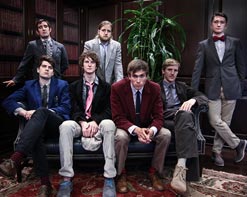 Gramps The Vamp tells a surreal story using sinister afrobeat-influenced funk grooves, strongman horn lines, and apocalyptic utterances from the dark corners of classic sci-fi and horror cinema. The result is DOOM FUNK: a cinematic stew that both makes you want to dance and raise an eyebrow. As you can imagine, a group that has the gumption to create something called DOOM FUNK is also going to be very keen on presenting their product the right way. With the brand new video for “Boomzap!” they’ve put together an animated beauty that is fearlessly adventurous, experimental, and appropriately bold.

Since their formation, the band has evolved from their house party roots to become a staple in the Chicago music scene, regularly playing prominent venues such as the Double Door, Schubas, and Metro. Despite their substantial growth and recognition in their hometown and beyond (Chicago Reader’s Best Of Chicago, Deli Chicago’s band of the month 9/14, and Deli’s Editor Choice for Best Emerging Chicago Artist 2014) the band has never lost their gritty edge, which is showcased in full force on their self-titled full length album. The dark, funky and sample laden album continues to find ears a year later, with several songs appearing in a retro Mexican horror film (Demonoid 1971) that will hit the film festival scene in the fall of 2015.

For their new music video “Boomzap!” this 8 piece outfit decided to stay off camera and let the music do the talking. The result is an animated video that puts a fresh tilt on the horror/sci-fi genres. The video centers around an invasion of a quaint village by a small army of walking eyeballs and the subsequent escape by the helmet-clad inhabitants. The core group narrowly makes it out on an awaiting space craft, where they eventually set up a new colony. Of course, this being a DOOM FUNK clip, it won’t be that easy for the newly-alien population. We won’t give anything away, but this wild clip is chock full of adventure and its fair share of harrowing action.

All of us here at HIP Video Promo are very excited to be working with Gramps The Vamp to bring you this wild and wonderful new video. The band is heading out on a special Halloween tour this fall and we would love to get you out to see them when they come to your town. Please contact Andy Gesner and the HIP Video Promo team at (732)-613-1779 or email us at info@HIPVideoPromo.com for more info. You can also visit www.GrampsTheVamp.com/.