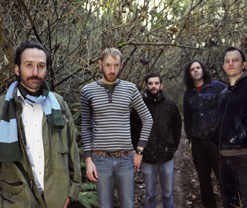 Greetings cherished programmers! It’s Andy Gesner and the staff from HIP Video Promo. Few bands are born to the kind of anticipation and excitement that greeted Grand Archives. Indie stars from their debut, the Seattle five-piece has carried the burden of exalted expectations with consummate grace. Mat Brooke and his combo may have wanted to sneak up on the underground – but when you’re a former (and founding) member of the Band of Horses and Northwest-rock legends Carissa’s Wierd, that’s not so easy to do. Pop audiences, rock critics, and weblog scribes predicted great things for Grand Archives – and with their gorgeous debut record, they’ve delivered.

Many are already calling The Grand Archives an early contender for album of the year. Certainly it’s hard to imagine a warmer, smoother, more tuneful, or more enveloping set; Brooke’s elegant songwriting is empathetic, relaxed, emotionally forthright, rootsy enough to satisfy any fan of sophisticated American music, and poppy enough for summer singalongs. And sing along they do – all five members of Grand Archives are accomplished vocalists, and their frequent multi-part harmonies are pure heaven (check out, for instance, the stunning voice arrangement on the heart-stopper “Torn Foam Blue Couch”). Traces of spooky Band of Horses-style alt-country are discernable here, as are the echoes of Iron & Wine and Beechwood Sparks, but listen closer: the sound and the style are resolutely their own.

Pitchfork has been enthusiastic about the group since their public debut – their first EP recordings were profiled and discussed at length on the site, and their journalists have followed all subsequent Grand Archives moves with mounting interest. “The way Grand Archives come forth with arms outstretched”, raves staffer Ian Cohen in his enthusiastic review of the full-length, “results in a debut that exceeds most expectations”. Other publications – online and elsewhere – have echoed this praise, never failing to point out just how downright ingratiating this music is. They’ve won fans wherever they’ve played – and after opening shows for Modest Mouse, performing on the Late Late Show, and touring the country with Sera Cahoone, it’s safe to say that Grand Archive fans are everywhere.

“Miniature Birds” begins with a woodsy harmonica before opening up into a verse melody that feels as warm and wide as the summertime outdoors. No surprise, then, to find that the offbeat – but engrossing – clip for “Miniature Birds” is something of a June idyll. The band (as bands often will) is rolling through bucolic countryside in a van, trees and flowers in full bloom around them. At the side of the road, they spy a hitchhiker – a kid who couldn’t be more than thirteen years old, armed with a guitar and singing to catch their attention. After they pick him up, they’re slightly alarmed to discover he’s an awfully enthusiastic guest: he’s the one who sings the words to “Miniature Birds”, getting in the eye of the camera and the faces of the members of Grand Archives. When they stop the van to stretch their legs and consult the map, the kid takes the steering wheel and drives away, stranding them on the dirt lane. But he’s just playing: they find him parked up the road at an alpaca farm, riling up the animals under a noonday sun. All forgiven, the band and the kid grab a bag of feed, and let the livestock eat from their outstretched hands.

It is a tremendous pleasure to be working with Lacey Swain and at the helm of another top-notch Sub Pop video promotion. The label has been generous enough to hook us up with charitable supply of their self titled record. So don’t hesitate to get in touch with us to score yourself a copy. As always, HIP Video Promo is here to satisfy all of your on-air giveaway needs. If you need more info, call Andy Gesner at 732-613-1779 or e-mail us at info@HIPVideoPromo.com.