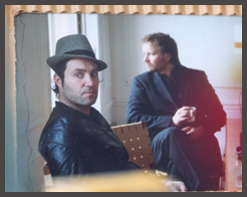 Label:
RECALL RECORDS
Video:
“BY THE TIME I GET HOME THERE WON’T BE MUCH OF A PLACE FOR ME”
Director:
Michele Civetta
Add Date:
September 10, 2007

A very warm summer welcome to you! It’s Andy Gesner and the staff here at HIP Video Promo with a debauchery-filled video with tons of promise. You may recall that we sent you a clip for “The Girl I Knew” by the super-cool Cousin – and if you do, you’ll definitely remember its star. The stunning Paz de la Huerta (Cider House Rules, Riding In Cars With Boys) starred in that video and dominated every frame she graced. The Cousin clip left viewers wanting more Paz de la Huerta, and in the sexy an provocative video for “By The Time I Get Home There Won’t Be Much Of A Place For Me,” Michele Civetta and Grand National have given us just that. Here, she plays the subject of a video diary, and as she dances through the streets, fields, and nightclubs of Paris, every move she makes feels like an irresistible come-on.

Named for a line in a Hall & Oates hit, A Drink And A Quick Decisionis the latest release from London’s favorite electro-pop duo. Kicking The National Habit, their last album, drew rave reviews on both sides of the Atlantic, and established Grand National as one of the leading lights of the international dance-rock movement. The popular acceptance of Kicking The National Habit helped open ears to similar bands like LCD Soundsystem, Hot Chip, and Prinzhorn Dance School, and the sturdy songwriting and urbane cool of A Drink And A Quick Decision promises to open still more American ears to sophisticated transnational indie-funk. “By The Time I Get Home There Won’t Be Much Of A Place For Me”, the lead single, slinks along on an elastic, propulsive groove – but still manages to tell a moving, articulate story of dislocation and heartbreak.

The Grand National sound is cinematic, artful and spellbinding, and Michele Civetta (Yoko Ono, Sparklehorse, Lou Reed) delivers a stylish video for “By The Time I Get Home…” that often feels like a three-minute trip to Cannes. Shot partially in Parisian hotspot Le Baron, it’s the tale of a man and a woman and a vacation gone bad. We barely see the videomaker, but it’s his hand-held footage we watch; Paz de la Huerta aims most of her beckoning gestures straight at the camera. The flirtation is near-constant – she makes her desire for her boyfriend manifest, the straps of her slinky dresses and bathrobes keep sliding down beneath her shoulders, and even when she’s sleeping in the back of a taxi, her breathing seems to invite sexual reverie.

But everything is far from perfect. At times, de la Huerta’s character seems to be out of control: boozy, dream-addled, and frighteningly close to losing consciousness. During some of the Le Baron scenes, her eyes narrow to slits, and she gyrates provocatively beside the singers in the band (Grand National, of course). She expresses herself physically – she’s got kisses for her boyfriend, but she’ll shove him off, too. By the end of the clip, she’s dancing with a strange mustachioed man; we watch her leave the club with him. The editing speeds up, and finally we realize what we’ve been seeing – the filmmaker, alone at home and pained, fast-forwarding through footage of a girl he lost long ago.

We’re elated to be working with Alex Sap and the excellent staff at Recall Records for the first time ever! This Grand National video is sure to keep you interested, that’s why we’re so glad to get to promote such an exciting new video. We’ve got plenty of copies of A Drink And A Quick Decision for all of your on-air giveaways or contest needs, so you need a copy, don’t hesitate to let us know! For more info, call Andy Gesner at 732-613-1779 or e-mail us at info@HIPVideoPromo.com .