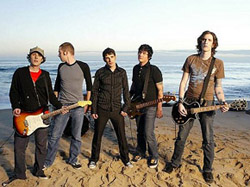 So it seems its going to be another fun year filled with even more great videos! It’s Andy Gesner and the staff from HIP Video Promo, and we’re thrilled to be working with an artist who has truly been an inspiration to musicians and audiences alike. You might remember Jonah Matranga, frontman of Gratitude, as the extraordinary voice of Nineties hard rockers Far. Despite recording for Epic, the Sacramento-based Far was very much an underground phenomenon: the group built its reputation on its homemade cassette recordings and independent, limited-run releases. Sometimes it seems to us like every single one of those small-run recordings found its way into the heart of a listener, and made Matranga and Far another dedicated fan.

The frontman and songwriter is keenly aware of the deep connection he has with his audiences, and has been unfailingly community-minded: supporting the local scene wherever he’s been, and contributing knowledge, resources, and enthusiasm to his peers’ projects. In fact, Jonah Matranga named his new outfit in honor of the gratitude he feels toward everybody who has assisted him over the years and for all who have listened to his music. (As an aside, when casting about for band names, Matranga was certain that Gratitude would be taken. It’s all too telling that it wasn’t).

In keeping with the moniker, Gratitude’s music exudes tremendous generosity. The songs are bold, bright slices of explosive modern rock; sturdily built, hooky, and immeasurably passionate. Former Crumb guitarist Mark Weinberg’s slashing, vibrant six-string proves the perfect foundation for Matranga’s vocal gymnastics. On Gratitude, the frontman calls forth all the pyrotechnics in his well-stocked arsenal, singing with an abandon that sometimes feels positively superhuman. “Drive Away” is about the best of it: a gut busting rock stomper with an indelible melody, a huge radio-ready chorus, and a lead vocal by Matranga hot enough to smelt steel.

The beautifully shot clip for “Drive Away” winks at Matranga’s penchant for emotional, over-the-top performances. We watch the Gratitude frontman board a city bus, and proceed to sing his song with all the gyrations and paroxysms associated with a passionate live performance. As he swings on the handrails and pleads with sleeping riders, the other occupants of the bus try their best to ignore him. This is the rock frontman as street-crazy – bursting at the seams with feeling, and desperate to connect with a public that isn’t always interested in listening.

By the end of the video, some of the riders have begun to cautiously watch Matranga; they’ve warmed up to him, and his earnestness has rendered him slightly endearing. A derelict even goes so far as to throw an arm around him in sympathy. But by the end of the ride, he sits at the back of the bus as shell-shocked as Dustin Hoffman in The Graduate: only he hasn’t got the girl to keep him company.

But he does have a killer band, and the rest of the clip is dedicated to showing the group in action. Director Nathan Cox films the five-piece at the seashore – they’re set up right on the beach, and on a Pacific rock jetty. Here, as Weinberg hammers out riffs with maniacal conviction, Matranga is free to sling himself at his microphone stand with the aggression of a crazed penitent. The ocean, uncontrollable as emotion itself, slams at the rock pier and sprays seafoam as the drums crash in.

Having worked with Jonah Matranga before (he was the voice and soul behind One Line Drawing), we are excited and proud to be part of yet another awesome promotional team that includes the ever impressive Diane Van Horn and her incredible staff at Atlantic Records. Gratitude’s self titled record comes out March 8th, but advance copies will be made available for interested programmers and on-air giveaways. If you need more info, call Andy Gesner at 732-613-1779, or emailinfo@HIPVideoPromo.com . You can also visit www.atlanticrecords.com to find out more about this impressive new buzz band.