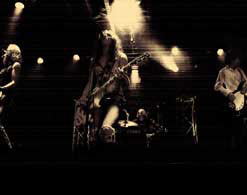 Hello to all my esteemed programmer friends, it’s Andy Gesner and the staff from HIP Video Promo! If you happened to have grown up when I did, you remember that any band worth their amplifiers invariably put out a live album. That practice fell into disfavor sometime in the Eighties – around the same time that recording engineers developed the ability to mechanically process realistic-sounding performances. But a select few bands still have the ability to create radio-quality material in a concert setting without having to resort to computer editing. And a few of these bands are bold enough to defy convention and release their own live recordings: rocking testimonials to their own concert greatness. Halestorm is such a band, and One And Done is such a recording. And it’s our privilege to introduce you to a talent that no studio could ever hope to contain: the incendiary Lzzy Hale.

Lzzy (the dropped vowel is a personal choice) draws comparisons to Ann Wilson and Janis Joplin every time she opens her mouth to sing. But she also works in the wider tradition of hard rock shouters – and her startlingly powerful vocals evoke those of heavy blues frontpeople stretching from James Hetfield and Eddie Vedder all the way back to Robert Plant, Jimi Hendrix, and Howlin’ Wolf. In concert, Hale is an unstoppable and elastic force, squeezing every ounce of energy and fury out of her tempestuous modern rock songs. An average rock group would have no prayer of keeping up with her – but Halestorm isn’t an average rock group. Led by the thunderous drumming of brother Arejay Hale, the band slams around their music with the casual disdain of garage punks and sharpens its edges with the bloodlust of heavy metal veterans.

One And Done, the band’s debut EP with Atlantic, is unmistakably live. No attempt has been made to polish the mixes or augment the arrangements – what you get here is an accurate approximation of what you’d experience if you were standing front and center at a Halestorm concert. The crash cymbals sizzle, the kick drum pounds, the lead guitar lacerates, and Lzzy Hale’s torrential wail leaps out of the speakers like an uncaged tiger. No need to dub in or fake the near-hysterical crowd reaction, either: Halestorm plays 200+ gigs a year, and they’ve mastered the art of moving the crowd. Their current tour with Trapt and Shinedown will carry them across the country and back, and plans for a European invasion are in the works.

With her long, frizzy black hair draped over her angelic face, Lzzy Hale looks the part of a heavy rock superstar; the rest of the band, cool and commanding in hipster threads, follow suit. The clip for “Takes My Life” catches the band in – what else? – a live performance before a delirious crowd. Twin stagelights shine directly at the camera, but the fire onstage easily dwarfs any artificial electricity provided by the club. Like One And Done, the clip for “Takes My Life” is left intentionally rough: the rawness and straight-to-the-gut visceral approach is part of the point. Shot on grainy videotape, the Halestorm video shares some of the candid quality of a reality television show or a closed-circuit glimpse behind the scenes at a soundcheck. It’s a peek into the day-to-day killer show-after-show reality of a band that is conquering the country, one audience at a time.

We would like to thank Diane Van Horn, Jason Pleskow, and everyone at Atlantic Records for bringing us this hard rocking video. If you would like set up video interviews or IDs while the band is on the Equinox Tour, please don’t hesitate to ask! You will not regret taking in a live Halestorm show when they play a town near you. We will also have plenty of copies of One and Done for on-air giveaways. If you need more info, call Andy Gesner at 732-613-1779 or e-mail us at info@HIPVideoPromo.com . You can also visit www.AtlanticRecords.com, or www.HalestormRocks.com to find out more about Halestorm.