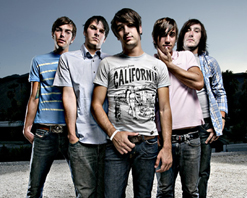 Greetings to all my music video kindred spirits! It’s Andy Gesner and the staff from HIP Video Promo, and today we’re thrilled to be teaming up with our friends at Drive-Thru Records once again to bring you the latest clip from the newest stars on their roster. Halifax clearly loves mid-Eighties riff rock and heavy metal, and they’ve got the chops to play the style as well – if not better – than the originators did. Here’s a band that easily bridges the gap between indie rock sincerity and hard-rock debauchery with startling skill. So it doesn’t really matter if you call Halifax an indie band with a metal edge, or a hard rock band with a sincerely direct delivery – what’s important is that this Southern California combo’s music epitomizes the best elements of both styles.

Consider “Our Revolution”, the lead single from The Inevitability Of A Strange World. Mike Hunau’s vocals swoop and soar, even when he’s worked up and on the verge of exploding. Despite his over the top vocal approach, he’s always tuneful and affectively engaging. But the six-strings – courtesy of guitarists Chris Brandt and Adam Charles – trade Pyromania licks and frame Hunau’s pronouncements against a backdrop of fuzz and crunch. “Our Revolution” pairs the immediacy and excitement of Hawthorne Heights and the delicious sleaze of Roth-era Van Halen, and will surely take its rightful place on that great collection of summer party anthems that plays perpetually in the popular imagination of young America.

It would be misleading to say that Halifax is taking to the road to support their new release – because Halifax never leaves the road. The quintet tours constantly, and in their short time together, they’ve brought their wild rock show to Europe, Japan, and just about every big and mid-sized city on the North American continent.

Ahmi Manson’s raucous video for “Our Revolution” gives viewers a sense of how much excitement this band can generate. Again, the clip couples hard rock decadence and emo democracy, and finds little dissonance between the two styles. The band plays on the floor of a giant warehouse, surrounded by grasping fans – much like you’d expect in a pop-punk clip. But these fans aren’t self-conscious indie kids: they’re glamorous and stylish, and they dance like models. The girls kiss the bandmates, the girls kiss each other, and it all seems likely to end up in the bath. Meanwhile, Hunau sings out “hell, yeah”, and the crowd answers back deliriously – drunk with the allure of skin and sweat and proximity to beautiful bodies, and the dizzy shuffle of rock and roll.

We are very psyched to be working once again with Kristine Ripley, Ana Bustilloz, and all the great folks at Drive-Thru Records. Halifax will on the road with Bayside until June 19th, then they will hook up with Story of the Year, Hawthorne Heights and Anberlin until August 1st, when the band will join this year’s Warped Tour. Please contact us to set up interviews when they come through your town. Also, we have plenty of copies of The Inevitability Of A Strange Worldavailable for all of your on-air giveaway needs. If you need more info, call Andy Gesner at 732-613-1779 or e-mail us atinfo@HIPVideoPromo.com . You can also visit www.DriveThruRecords.com or www.HalifaxRock.com to find out more about Halifax.