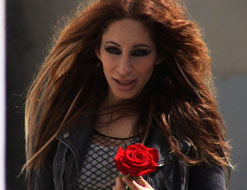 Hey, everybody, it’s Andy Gesner and the staff from HIP Video Promo, here to introduce you to a startling and seductive new singer. She may be a budding pop star with a radio-ready sound, but Hani is a thoughtful conceptual artist, too — and the clip for “Blow”, her latest single, realizes the dark poetry and romantic imagery of her evocative lyrics. Beginning with the figure of a fading rose, “Blow” tells the story of a woman drained and left lifeless by her lover. She’s been left limp, without color, and powerless to resist his parting kiss. Fans of such popular series as Twilight, The Vampire Diaries, andTrue Blood will recognize these at once as vampire tropes — and, indeed, the “Blow” video is a deftly-woven vampire story. The enduring power of the supernatural tale is put at the service of this infectious song, and the result is a narrative video that’s seductive, mesmerizing, and maybe even a bit chilling.

And it’s Hani herself who brings the video to bold (un)life. She didn’t direct the clip — San Francisco cult filmmaker Eddie Granillo of Keptone Films did — but it’s her own concept shot from her storyboards, and her engaging lead performance demonstrates her natural affinity for the vampire tale. An independent in the truest sense, the young pop singer writes and produces all of her music. Astonishingly, tracks like “Blow” sound as dramatic — and dynamic — as anything on a Top 40 radio playlist. It’s a testament to Hani’s talent, and it’s gotten her noticed by industry insiders: earlier this summer, her song “From The Start” was featured in the debut episode of the new Melrose Place.

It’s easy to see why Hani’s music might appeal to television and movie producers — it’s cinematic, instantly gripping, sharply-performed and shrewdly economical. As “Blow” demonstrates, Hani is one of those rare writers who can compose an emotionally-resonant story in a few verses. Of course, it doesn’t hurt that she sings like a fallen angel: her voice is cool and beguiling, and it communicates vulnerability, sympathy, and menace in equal measures. But as dazzling as her vocals are, she’s a writer at heart, and the architecture of her pop songs is airtight: “Blow” boasts a terrific chorus, but also a terrific bridge. That’s a rare commodity on contemporary pop radio, and another way in which Hani stands out from the crowd.

It takes a special singer to be so assiduously courted by vampires. In the “Blow” clip, Hani is confronted on all sides by alluring monsters of both genders, dressed in provocative clothing and reaching dangerously for her as she sings. When she succumbs to the bite of a sultry blonde, it’s both disturbing and profoundly sexy. Such is the trans-generational appeal of the vampire tale — it appeals simultaneously to our desires and fears, and reminds us of the dangers inherent in all of our appetites. Shot in crisp black and white with a few illustrative dashes of blood-red (on rose pedals and elsewhere), the “Blow” clip promises to get American audiences hooked on this dazzling singer and spellbinding storyteller. It’s out just in time for Halloween, too, so keep that cross handy — unless, of course, you wouldn’t mind a bite.

We are very excited to be working closely with Hani to bring you this seductive new clip. We’ve got plenty of copies of the “Blow” single on hand for you on-air giveaway needs, so please drop us a line if you’d like to sink your teeth into them! If you need more info, call Andy Gesner at 732-613-1779 or e-mail us at info@HIPVideoPromo.com .