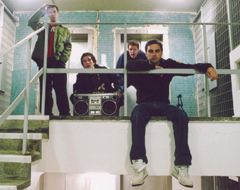 Greetings everybody! It’s Andy Gesner and the staff from HIP Video Promo, back with a clip from a new band that’s already set the UK afire with curiosity and enthusiasm. If you only know the town of Staines from its satirical representation on Da Ali G Show, you’d be forgiven if you thought that the sleepy London suburb was incapable of producing a supersonic rock and roll band. Well, Hard-Fi is here – and the world will never look at Staines the same way again.

Life in the exurbs – and on the periphery of the capital’s cultural influence – has its benefits. While Staines has nothing like a thriving indie rock subculture, the distance from hipster London and its fashionable demands has allowed Hard-Fi to develop a big, bold sound that’s entirely their own. They rock, that’s for sure – but they love ska, disco, and American hip-hop, and their diverse interests are apparent in everything they record. “Hard To Beat”, the group’s lead single, was a splashy, jumpy, Eighties-dayglo piece of danceable electro-rock. Brash, confident, and with just enough self-deprecation to be lovable, Hard-Fi’s first release established them as Britain’s band of the moment.

“Cash Machine”, the follow-up, is, if anything, even bigger and bolder. It’s a song with a gigantic chorus – one built around an anthemic melody, funk bass, whiny melodica, sweeping synth strings, and the dynamic vocal presence of frontman Richard Archer. Giving nods to musical traditions from Britpop to New Romantic (there’s more than a little Duran Duran in this band’s approach) to 2Step, the group nonetheless blasts off into uncharted pop territory with a sound that’s entirely now. Like Dan Skinner in “It Was Supposed To Be So Easy”, Archer laments his limited bankroll with a characteristically British combination of outrage, fatalism, and cheeky humor. “No, no, this can’t be!”, he protests as the ATM dispassionately reports the bad news; later, faced with mounting bills and a pregnant girlfriend, he tears into the chorus with a hunger that can’t be approximated by those of us who’ve had no experience with the dole queue.

That hunger and brashness is captured in the clip for “Cash Machine”. It’s a heist narrative – set, as all good post-Guy Ritchie caper flicks should be, at Heathrow Airport. But Hard-Fi didn’t get permission from the flight operators at Heathrow to shoot there. Instead, they just hopped the fence with their gear and set up right on the edge of the landing strip. Planes soar over the heads of the bandmembers as they sing, hair blown back in the wind. They’re not actual robbers, but they are real guerilla filmmakers. If you detect an edge of panic in this video, it’s completely legit – at any moment, the authorities at Heathrow could have tapped them on the shoulders and escorted them to the nearest station-house!

Considering the circumstances under which it was shot, the “Cash Machine” video is remarkably coherent. We watch the band addressed by a kingpin, use a makeshift explosive to gain entry into the airport, break down the doors of a control room, and administer a silly-string hit on one of the bad guys. A nervous-looking Archer sings the entire third verse at gunpoint – but by the time he reaches the chorus, his bandmates have seized the initiative back by clobbering his assailant. The whole thing is a lark, wildly entertaining, and testament to what a courageous indie act can do with a little bit of videotape and a whole lot of guts.

This summer Hard-Fi will be coming to the states for a string of shows and there is sure to be lots of buzz surrounding this band. We have copies of Cash Machine if you are interested in setting up on-air giveaways for your viewers. If you need more info, call Andy Gesner at (732) 613-1779, or email info@HIPVideoPromo.com.