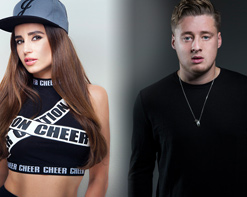 Do you ever get tired of videos that feature the California sun, the crystal clear Pacific Ocean and the stunning women of LA? No? Good, because neither do we! With their new video for “LA Girls,” Harrison and Juicy M take this concept and makes it even more enticing than we thought possible.

Juicy M began her career in Ukraine as the resident DJ at a multitude of clubs, quickly expanding her footprint to include awards, international tours, and opening for artists such as Black Eyed Peas, Skrillex, and more. She blasted onto the mainstream scene in 2013, making a name for herself with her bootleg of Major Lazer’s “Watch Out For This (Bumaye).” She then leveraged that into beginning her own label, JUMPP RECORDS. Her hard work, stellar product, superior technical prowess, and unique infusion of hip-hop influences got her on the radar of Armada Music, who signed her up to their exceptional roster.

For the newest single, she’s teamed up with UK singer Harrison to lend a classic rock tilt to the new single. His gritty vocal delivery is chock full of swagger and attitude, even invoking some of the confident strut of 80s hair metal. Combining his pipes with the dynamic production of Juicy M, it’s a song that sweeps across the sonic and genre spectrum with reckless abandon!

The video for “LA Girls” starts with Juicy and her girls heading through the CA hills, piled into a convertible Benz. When the car breaks down and they have to set off on foot, it’s Harrison and his crew to rescue, inviting them over to their gorgeous pad. Some poolside hangs ensue, until they move to the beach for a spirited match of co-ed volleyball. To really drive home the scope of the beauty, Harrison delivers his vocals from high atop the hills of the Pacific, putting an exclamation point on this coveted jam.

We’re super excited to bring another stellar clip to you and your viewers on behalf of Armada Music. This one is arriving just in time to become the hottest new visuals for summer of 2016. Please don’t hesitate to be in touch if there’s anything we can do on our end to help get this into your programming. Please contact Andy Gesner and the HIP Video Promo team at (732)-613-1779 or email us at info@HIPVideoPromo.com . You can also visit www.ArmadaMusic.com for more info on Harrison x Juicy M.